In mid-November, as borrowing costs on Chinese property developers’ debt soared to their highest levels since the financial crisis, the government issued a bond of its own.

In sharp contrast to the chaos in the property bond sector, part of China’s $5bn euro-denominated deal was priced at a negative yield — meaning investors were effectively paying to lend to the government.

That level of demand highlights the limited impact — for now — of the problems in China’s vast property industry. It has caused chaos in Asia’s high-yield bond market but has shown few signs so far of directly spilling over to other asset classes.

“There’s been some talk about a Lehman Brothers moment [which marked the 2008 crisis] and we don’t really see that happening,” says Alexis Duvernay, a London-based investment specialist at M&G Investments. “The market as a whole has been quite resilient,” he notes. “It’s really focused on the real estate sector”.

Nonetheless, the trauma in China’s property sector has been severe. Yields on risky Chinese debt soared to 29 per cent in November, an ICE index shows — the highest level since the financial crisis of 2008-09. They had stood at just 10 per cent in September.

But, towards the end of that month, China’s property market was thrust into the global spotlight by the plight of Evergrande, the world’s most indebted property developer. It missed a bond payment on its international debt after weeks of worsening liquidity problems and stalled projects.

The company soon became a symbol for a broader reckoning across the country’s real estate industry which, for years, had underpinned its economic trajectory as the population flocked from the countryside to burgeoning cities.

At the heart of the recent sell-off are the bonds that companies issued as part of that construction frenzy. Since last year, the government — concerned over the risk of asset bubbles in its property market — has sought to limit developer borrowing and constrain mortgage lending at banks.

But property groups’ leveraged balance sheets have become a vulnerability as sales slow on the mainland, forcing a rush to raise cash and leading several developers — including Fantasia, Sinic and China Modern Land — to default on their debts in October.

“I think we can say it is a sector-wide concern right now,” says Matthew Chow, an analyst at S&P. “Obviously, people are concerned about the declining contracted sales, the tightening on funding, and recently there are also concerns about [whether there is] any hidden debt”.

He adds that developers are major borrowers “because the nature of property development is capital intensive”, and that they “need to continue to deploy capital into land”.

Chinese developers’ bonds make up a major portion of Asia’s $400bn high yield debt market. Out of the $86bn of speculative bond issuance on the continent in 2020, they accounted for 61 per cent, according to S&P data.

But markets are now largely closed to new borrowing.

Arthur Lau, co-head of emerging markets fixed income at PineBridge Investments, points to the example of a bond issued earlier this month by the developer Gemdale, on onshore markets that have been mostly shut. “The onshore market is open to a very select group of property developers with government relationships or a very high quality credit standing,” he says. For names with lower credit ratings, he adds, “they need to resort to other means of fundraising”.

Evergrande alone has almost $300bn in total liabilities, around $20bn of which are international bonds, and faces a looming wall of debt deadlines in coming months. It has already missed several bond payments, only to narrowly avoid an official default by transferring the funds just before the expiry of 30-day grace periods.

Lau says developers are “basically buying time” by selling assets or projects, but that this “is not enough for them to refinance the whole outstanding debt”.

If they can’t sell to anyone, they won’t be able to recoup their investment and cash flow will be dead

Real estate developers ultimately rely on selling apartment projects for cash. In the case of Evergrande, which has nearly 800 projects, work has resumed at some of them amid signs of government intervention.

But the wider property market is under pressure, with residential sales slumping 24 per cent in October. Growth in the prices of new homes — the most important metric in a country that still involves huge levels of construction — turned negative month-on-month in September and worsened in October.

The wider role of the Beijing government remains uncertain. In November, state media reports indicated that some of the policy framework might be eased in relation to certain developers, but few expect a complete reversal of the restrictions, or the deleveraging purpose they target.

While signs of a sharp sell-off beyond the property sector are limited, the US Federal Reserve has warned about the effect on market sentiment. 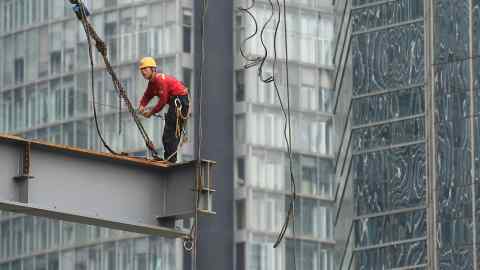 The central bank said stresses within it posed “some risk to the US financial system”, citing the possibility of a “reduction in investor risk appetite”.

One crucial factor is the performance of the Chinese economy, which staged a dramatic recovery from the initial stages of the pandemic but has since lost momentum. Over coming months, its trajectory — as well as that of the sales and repayments of developers — will become clearer.

“The whole scheme of property developers is to rely on refinancing so they can repay [debt] at the same time that they can continue to produce physical property to sell,” says Lau. “If they can’t sell to anyone, they won’t be able to recoup their investment and cash flow will be dead.”

‘It’s all come together’: Katie Taylor ready for biggest fight women’s boxing has ever seen﻿
2 hours ago