Senior executives in the City of London have expressed alarm at rising inflation and accused the UK government of lacking a credible economic plan to fix mounting problems.

They also voiced concern that an unintended consequence of the pledge by UK prime minister Boris Johnson at the recent Conservative party conference to create a “high wage, high skill, high productivity” economy, could be to fuel inflation.

They also called for a more flexible approach to the restrictive post-Brexit immigration regime and pointed to the need to invest in skills training and technology to boost productivity.

Amanda Blanc, chief executive of Aviva, said that inflation was “worryingly high”, but so far not out of control. She said it was likely that the UK faced a “difficult and nervous six months”.

“Enforced higher spending on gas and electricity bills . . . will hurt households’ ability to spend on discretionary purchases,” she added. “But we’d expect to see prices falling back from next year — possibly fairly sharply. Before then, it’s an uncertain and uncomfortable period ahead.”

Charlotte Hogg, chief executive of Visa Europe, said it was “striking” that economic policies were now politically driven. “The economic arguments aren’t there at all in the way most governments have had in the past,” she said.

Markets and businesses used to know how to read policy signals and how to react, she explained. “Now it’s much harder . . . we are facing into the outcomes of a series of political priorities that are being pursued that don’t have that structure behind them.”

Paul Drechsler, chair of the International Chamber of Commerce and London First, was also concerned “about the total absence of even a sketch of a plan to achieve such a sunlit upland” of high wages and high productivity promised by Johnson.

The government should use the post-Brexit points-based immigration system to allow foreign workers in based on economic needs, he said. “In the meantime, if nothing is done, shelves will go bare, supplies will go undelivered, and prices will go up.”

Mike Rake, former BT and Worldpay chair, agreed a flexible policy towards immigration was needed to allow skilled workers into labour starved sectors. A view voiced by others in the City Network such as Catherine McGuinness, head of policy at the City of London Corporation.

McGuinness said that financial and professional services firms — like other parts of the economy — were seeing significant cost increases in securing high-skilled talent.

Rake welcomed the vision to improve low wages and productivity, but added that “some of the policies suggested have not been thought through and risk damaging the economy further”.

He described a “perfect storm” of problems — energy costs, labour availability, supply chains and inflation. “Whilst many of the challenges are global we also have Brexit, which has and will further accentuate the problems.”

Andreas Utermann, former Allianz Global Investors chief executive, said there was now “ample evidence of inflationary pressures building”, listing the supply shortages across almost all sectors of the economy. “This is not just in food and energy, but bicycles, cars, TV monitors, not only in the UK but globally.”

Sustained rising prices that led to runaway inflation were almost always related to wages, he said, which mean that the UK was “very exposed” owing to labour movement restrictions after Brexit.

“We still don’t know exactly how many EU citizens left for good over the last two to three years but it is abundantly clear that the healthcare, hospitality, professional services sectors in particular are suffering labour shortages that are not only driving up wages but also risk depressing growth.”

Anne Richards, chief executive of Fidelity International, agreed that the recent shocks to the British labour market have been extreme. “To get through it will require a laser-like focus on removing unnecessary friction on the supply side, while simultaneously accelerating investment to improve productivity.”

She added that a permanently higher inflationary regime would not be a “comfortable position for monetary policy with rates so low and strengthening headwinds for growth”.

Douglas Flint, chair of fund manager Abrdn, warned that it was difficult to see only “transitory” inflation but was reassured that pressures were not yet out of control.

He added that the “laudable aim” of higher wages would put pressure on public sector wage negotiations. “How skilful the government is in balancing these demands against the timing of the productivity improvements needed to avoid further inflationary pressures will be a key signal to the markets regarding the inflation outlook.” 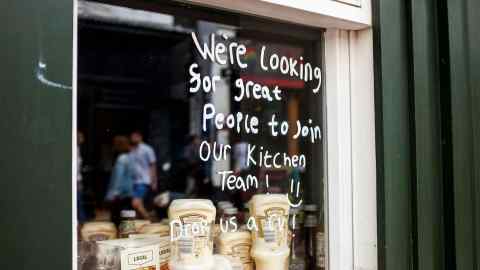 Miles Celic, head of TheCityUK, which represents financial services firms, said the challenge of improving UK productivity should not be underestimated as it had “so far defied an easy fix by successive governments”.

He also said that a critical issue for the UK’s longer-term economic success would be attracting, training and retaining talented workers.

In response, the government said it was taking action “to address businesses’ ​concerns about the ​global issues of increasing wholesale gas prices ​and challenges with supply chains”. Its commitment to price stability was “absolute”, adding that its plan for growth set out the opportunities it would “seize across the UK to drive economic growth, create jobs and support British industry”.

Just Like Their Manager, the Red Sox Keep Coming Back
10 mins ago

M. Garcia offers ‘no excuses’ after stunning loss
43 mins ago