Sign up to myFT Daily Digest to be the first to know about UK business & economy news.

Britain’s poorer households face a cost of living crisis this winter and next spring with the main welfare benefit being cut by £20 a week and food and energy bills set to rise another £7 a week in a rare squeeze on incomes.

All families will face higher energy and food bills in the autumn with those coming off fixed price energy contracts or cheap deals facing increases of up to 50 per cent in their bills.

There will be little respite in the spring because economists are predicting further surges in gas and electricity prices along with big tax increases on earnings from April following chancellor Rishi Sunak’s decision to increase income tax and national insurance revenues.

The cost of living squeeze will be hardest for the poorest families, according to Financial Times calculations, because they are most likely to receive universal credit and other benefits, and allocate a greater share of their spending to the necessities of food, gas and electricity.

Torsten Bell, chief executive of the Resolution Foundation think-tank, said the autumn was likely to see a “toxic” combination of pressures. “We are going to have households which aren’t just seeing the cost of living is rising but also they will have a significant income cut when universal credit is reduced,” he said.

Lord Gavin Barwell, a Conservative peer who served as chief of staff to former prime minister Theresa May, warned that the rise in energy prices “definitely has the potential to become a crisis”.

“We’ve got the tax increases that they’ve just brought in, we’ve got the universal credit reduction that’s about to come online, plus rising energy bills,” he said. “I think there is a real political danger here of cost of living issues becoming a real difficulty for the government.”

Politicians and the Bank of England are acutely aware that inflation will remain a hot topic this autumn. Following the shock jump in the annual rate of price increases from its target level of 2 per cent in July to 3.2 per cent in August, inflation is likely to climb higher after a pause in September to exceed 4 per cent towards the end of the year.

“The next few months of soaring inflation will be an uncomfortable period for the [BoE’s] Monetary Policy Committee,” said Paul Dales, chief UK economist at consultancy Capital Economics.

With wage settlements not rising anywhere near as fast as inflation and employers likely to want to be tough on pay because they will face higher national insurance taxes on payroll costs, households will feel the pinch.

The worst squeeze will clearly be faced by lower income working age households because they will suffer the full effects of October’s cut to universal credit and are harder hit than richer households when food and energy costs rise.

The 6m families receiving universal credit are set to lose 5 per cent of their income on average from around October 13 when the rates change to remove the pandemic-related £1,000 a year uplift. About 1m will lose more than 10 per cent according to the Resolution Foundation.

An attempt by rebel Tory MPs to save the “temporary” Covid-related £20-a-week uplift failed on Monday after the House of Commons Speaker, Sir Lindsay Hoyle, declined to accept an amendment to pensions legislation on the issue.

Sunak is determined to end the uplift next month — continuing the policy would cost £6bn a year — although Tory strategists admit that the decision is causing a backlash among voters.

The latest official data on the spending patterns of different families comes from the pre-pandemic financial year of 2019-20 and shows that those with the lowest incomes proportionally spent much more on food, gas and electricity than richer households.

Those in the poorest tenth allocated 21.2 per cent of their expenditure to these three items compared with the richest tenth devoting just 9.5 per cent.

With Ofgem, the gas and electricity regulator, set to increase the price cap on bills by 12 per cent on October 1 and economists expecting a further increase of 15 per cent to 17.5 per cent next April, poorer households will increasingly have to cut back on either heating or discretionary spending.

Food prices are also rising sharply, both globally where higher commodity prices are hurting households in emerging economies, and closer to home where UK food price inflation rose 1.1 per cent in the month of August alone, much higher than normal for that month.

Capital Economics expects food prices will rise another 2.3 per cent over the next two to three months.

By spring 2022 the additional costs of food and energy will raise the share of spending by the poorest tenth of households on food, gas and electricity by a further 2.1 percentage points, according to FT calculations.

Some poorer families will be eligible for the government’s “warm home discount” that lowers their bill by £140, but it has been in operation since 2011, so will not protect households from rising prices.

Jonathan Reynolds, shadow work and pensions secretary, said: “People are seeing the cost of the weekly shop going up, their energy bills going up, transport costs up. Yet the government’s only response has been to clobber working families with a double whammy of tax rises and universal credit cuts.” 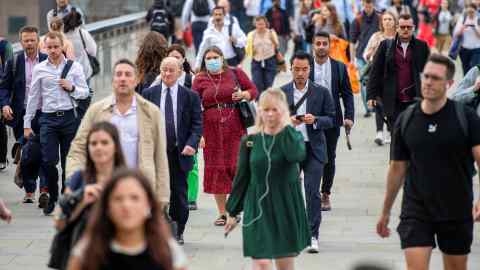 One government aide said there was “some real anxiety in the Treasury about this, no doubt about it, they’ve seen it coming for several months”.

Kwasi Kwarteng, the business secretary, told parliament on Monday that he would retain the energy price cap as a means of helping households weather the rise in energy prices through the winter.

Pressed further on the cost of living crisis from higher energy bills and concerns about the security of supply, Kwarteng pledged to MPs on Tuesday that, “protecting consumers is our primary focus and is shaping our entire approach to the issue”.

He did not commit to further support for vulnerable households, however, saying that universal credit and other support was a matter for the chancellor and secretary of state for work and pensions.

Toews, Kane: Wish we did more to help Beach
21 mins ago