Terry McAuliffe, the Democratic candidate for governor of Virginia, had always expected abortion to be a factor in his race against Glenn Youngkin, his Republican opponent and a former private equity executive.

But after Texas enacted a new state law imposing tight restrictions on abortions last week, McAuliffe attempted to propel the issue into the centre of the campaign with less than two months before election day and early voting that starts on September 17.

“Glenn Youngkin wants to turn Virginia into Texas. We’re not going to allow it,” McAuliffe told reporters in Richmond on Tuesday. “This is a horrible draconian law.”

McAuliffe’s focus on abortion in the biggest US political contest of Joe Biden’s first year in office highlights the extent to which Democrats believe they can benefit politically from the Texas law by depicting Republicans as eroding women’s rights.

“I think most reasonable, moderate voters will see this law as both kind of extreme and, really in some ways problematic,” said Lara Brown, director of the Graduate School of Political Management at George Washington University.

For years we have said that Roe vs Wade is under attack, and Roe vs Wade has ended in Texas as we know it

The Texas law has emerged as a lightning rod because it bans abortions after roughly six weeks of pregnancy, sooner than many women know they are carrying a child, with no carve-outs for cases of rape or incest. Another provision allowing citizens to sue people for performing or aiding abortions, potentially receiving $10,000 in return, has also attracted harsh criticism.

The political impact of the Texas law was amplified by the fact that the Supreme Court, with a majority of staunchly conservative judges, have declined to stop the ban from taking effect.

The court’s decision has raised concerns that it might be leaning towards overturning Roe vs Wade, the ruling from the early 1970s that established the constitutionality of the right to an abortion. If that were to happen before the 2022 midterm elections, it could inflame the Democratic base and put Republicans on the defensive heading into the vote.

“The president’s party is at a disadvantage in a midterm environment, so it naturally looks for things that will get their own voters engaged,” said Kyle Kondik, an analyst at the University of Virginia’s Center for Politics. “Threats to Roe vs Wade, and strong restrictions on abortion are things that are definitely motivating for Democrats.”

Since the Texas law was enacted last week, Biden has blasted its main provisions as an assault on reproductive rights, describing reward payments for successful lawsuits against abortion providers and facilitators as “un-American”.

Merrick Garland, the attorney-general, this week announced a crackdown on violence and intimidation against women seeking abortions or clinics and their staff. He also unveiled a civil lawsuit against Texas to try to stop the law, although it is unclear whether the legal challenge will succeed.

“This kind of scheme to nullify the constitution of the United States is one that all Americans, whatever their politics or party, should fear,” Garland told reporters on Thursday.

Meanwhile, Democrats in the House of Representatives are considering legislation to enshrine abortion protections into law, but this would face big obstacles in the Senate.

“Democrats and the White House have to show they are doing something,” said Susan Roberts, a professor of political science at Davidson College in North Carolina.

Some Republicans and conservatives have embraced the Texas law as a big policy and ideological victory and announced attempts to emulate it in the hope that it will be rewarded with enthusiasm on their side.

Kristi Noem, the Republican governor of South Dakota, said in a tweet last week that she wanted to “make sure we have the strongest pro-life laws on the books in South Dakota”.

But many congressional Republicans have shied away from embracing the Texas law, in a sign that they see it as more of a political liability than an advantage.

One disturbing precedent for them is a 2012 Senate race in which Todd Akin, the Republican candidate for the upper chamber in Missouri, was winning his contest against Democrat Claire McCaskill until he said that victims of “legitimate rape” rarely got pregnant because their bodies stopped it. 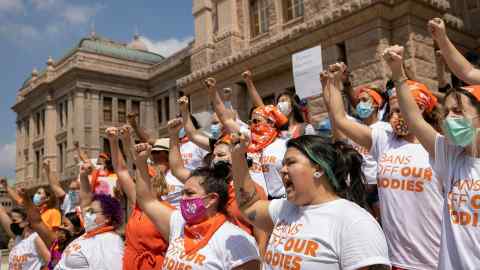 She added: “There is generally a tendency for strategists to be more moderate than Republican Party voters, so maybe that’s not indicative of anything. [But] some of those people might actually have access to some polling that the rest of us don’t.”

Greg Abbott, the Texas governor, has made some missteps of his own in discussing the abortion law that have put Republicans in an even tougher spot.

Most notably, when asked about the lack of an exception for rape, Abbott simply responded that he would work to “eliminate all rapists from the streets of Texas”, which was dismissed as clearly unrealistic.

“If governor Abbott has a means of eliminating all rapists or all rape from the United States, then there would be bipartisan support for that,” said Jen Psaki, the White House press secretary, on Wednesday.

Back in Virginia, Macaulay Porter, a spokesperson for Youngkin, sought to distance the Republican candidate for governor from the Texas law.

“Glenn Youngkin has been clear from the beginning of the campaign that he is pro-life. He believes in exceptions in the case of rape, incest, and when the mother’s life is in jeopardy,” she said.

“Terry McAuliffe is trying to divide us and distract from his own extreme, pro-abortion position. The Texas law is not something that is here in Virginia,” she added.

But McAuliffe is likely to continue bringing up the issue with voters. “For years we have said that Roe vs Wade is under attack, and Roe vs Wade has ended in Texas as we know it,” he said on Tuesday. “I cannot tell you how dangerous this is for women”.

Which five teams will represent Africa at the World Cup in Qatar?
11 seconds ago