Phillipe Moreau had to get creative to keep Temahome’s production lines whirring after shortages of timber, resin and steel left half of his furniture maker’s 600-item catalogue out of stock earlier this year.

“We played around,” said the chief executive of the French maker of wooden tables, shelves and TV stands. “If black panels weren’t available, we switched to oak or white ones.”

Across the world, manufacturers of everything from cupboards to cars or computers are still grappling with a logistics crunch that has disrupted supplies of essential inputs, threatening the post-pandemic economic rebound and boosting inflation.

Combined with rising consumer demand as economies reopen, in Europe these shortages have led to inflation reaching a decade high — a factor that may lead the European Central Bank to scale back its €1.85tn pandemic stimulus program this week.

Furniture, the latest sector to feel the supply chain pinch, encapsulates the broader problems. Even giant companies such as Ikea have been affected. The Swedish flat pack furniture maker, has said it “cannot predict” when normal supplies will resume because of a “perfect storm of issues” that includes a shortage of truck drivers in the UK.

“We’re not naive to think that it’s over in the next weeks or even months,” Henrik Elm, Ikea’s global supply manager, said of the disruptions.

A record one in three EU furniture makers say they have been affected by supply shortages, according to a quarterly business survey by the European Commission. At a global level, high shipping costs and delivery delays because of bad weather and Covid-19 shutdowns in major Asian ports are key pinch points.

Transport was a “nightmare” where even “a screw or small component from Asia can take three months”, said Temahome’s Moreau, who also heads France’s furniture trade body. “We had 16 containers being shipped to the US in June and July and they still hadn’t got through by August. Lead times to the US have doubled.”

Transport costs have soared. Between China and Europe, fees are now nearly seven times higher than in August last year, according to data provider Freightos.

To work around that problem, Ikea says it is diverting some supplies on to trains. “We will use rail transport from China to Europe to free up container capacity that we can use to ship more to US,” the company said.

In the US, meanwhile, lumber supplies usually transported by truck through the southern states have been disrupted by Hurricane Ida, which pummeled the Gulf Coast last week.

Even so, global lumber prices have halved from the record high they reached in May, although they remain above pre-pandemic levels. Other sectors are less fortunate.

In Germany, where car production is 30 per cent below pre-Covid levels, Volkswagen plans to add extra shifts to clear an order backlog. But new Asian outbreaks of the Delta variant have shuttered ports and key semiconductor manufacturing facilities there, stymying plans. It’s a common problem throughout the sector.

“If you need to receive goods from Asia, it’s hard to find containers, and this is clearly creating difficulties,” said Matteo Tiraboschi, executive vice-president of Italy’s Brembo Group, which makes automotive brake systems. But Brembo is helped in that it locally sources some supplies, which puts the business “in a fairly privileged position”. 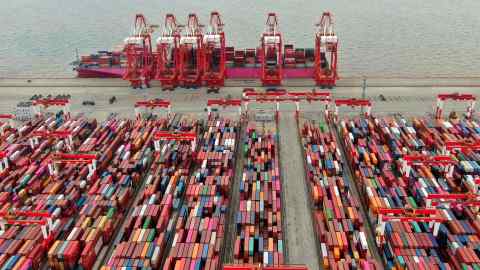 Others are struggling to meet demand. A DIHK survey of German businesses found 83 per cent reported price increases or delivery problems for raw materials, intermediate products and goods in August.

This has broader economic consequences. Lack of inputs for companies such as Temahome, which sells in more than 45 countries around the world, has constrained exports and dragged on eurozone growth.

In July, eurozone producer prices rose at an annual rate of 12 per cent, the fastest since records began in 2001, while consumer inflation hit a decade high of 3 per cent in August.

When the disruptions will be resolved remains an open question. It also varies by industry.

VW believes the supply of computer chips “will remain very volatile and strained” through the third quarter of this year.

But Ana Boata, head of macroeconomic research at credit insurer Euler Hermes, believe full normalisation will not happen until 2023, the result of a decade of under-investment in maritime shipping. Morten Engelstoft, chief executive of APM Terminals, has also warned of a “vicious circle” created by surging demand and suggested a consumer slowdown is needed for shipping groups to catch up.

Others are more hopeful. Giovanni Arvedi, founder and president of Italian steelmaker Arvedi group, said the steel market “had a flare-up at the beginning of the year . . . but that is no longer the case” as shuttered blast furnaces restarted.

The optimistic general view is that labour and input shortages will ease as demand in western economies rebounds, leading to a recovery “that is merely more spread out . . . over a few quarters than an overall weaker recovery”, Bert Colijn, senior economist at ING, said.

The more pessimistic view is that it is too early to tell.

“Uncertainty remains as to how the stability of global supply chains and the handling of the coronavirus pandemic will develop, especially in China, Europe and the US,” said Andreas Möller, spokesman for Trumpf, a German machine tool and laser technology company. “Both factors are the Achilles heel of our operating business worldwide.”