Rising rates of infection and deaths; talk of mandatory vaccinations and travel bans; no access to public transport, workplaces or restaurants without proof of jabs, test results or recovery . . .

The news from Germany has been getting more dramatic by the day, with predictions that it may only get worse. It’s all very different from the situation I found in Berlin just a few weeks ago. Then, normal life seemed to have returned to the city — albeit with lots of mask-wearing indoors, which, this being Germany, was pretty much universally and dutifully observed. If anything, the talk back then was about what was going on in the UK, where infection rates were shooting up.

Now the situation is reversed and conversations with friends and family in Berlin revolve around whether Christmas plans may be cancelled (again), and an ongoing sense of bewilderment and frustration that the number of unvaxxed remains so relatively high.

Answers — from mistrust of Big Pharma to antipathy towards the state, from inept political co-ordination to extremists and conspiracy theorists making mischief — vary according to who you ask. The new would-be “traffic light” coalition government, which finally unveiled its plans this week amid talk of an exciting new era in German politics, certainly has its work cut out.

A man of letters
One of the reasons I was in Berlin was to attend a memorial event for the writer Karl Heinz Bohrer. Standing on the balcony of his publishing house in Mitte, central east Berlin, looking out across the city’s ever-changing skyline with its glassy newcomers, hardy familiars and baroque remakes, friends and colleagues reflected on a remarkable and busy life that spanned nine decades until his death in London this summer.

West (and later united) Germany, in all its cowering fussiness, was a particular target for his scathing linguistic pyrotechnics

A luminary in the world of German letters and academia — a “free radical” or “a German Tom Sawyer”, as some dubbed him — Karl Heinz taught in Germany and at Stanford, edited an influential Berlin cultural journal from Paris and later from London. He also wrote prolifically. There were scores of books on subjects ranging from the state of Britain and the aesthetics of fear and the delight of the unexpected, to essays on European culture and two volumes of well-received memoirs that evocatively captured postwar Germany.

Coming of age in the stultifying world of 1950s West Germany — where the past was something best not talked about — Karl Heinz went on to witness and chronicle the intellectual and political turmoil of the 1960s. He was friends with Ulrike Meinhof, once one of the smartest and most unflinching columnists of her generation, who tried to convert him to her cause before she embraced terrorism. But Karl Heinz was a life-long unbiddable liberal who became a critical observer of the impact of new left thinking on academic and literary life.

He also had deep connection to England — on tour in the 1950s after leaving school; as a correspondent in London for the Frankfurter Allgemeine Zeitung, where he covered the IRA, football and industrial strife and wrote an elegiac book about a nation wrestling with decline; and then again in this century, when he married my aunt and became a wonderful and inspirational addition to our family. Conversations over the dinner table in Stockwell, where he wrote, ranged far and wide, and did not always end in agreement.

West — and later united — Germany, in all its cowering fussiness, was a particular target for Karl Heinz’s linguistic pyrotechnics, and was dispatched in typically scathing, surgically precise, wickedly funny and memorable fashion. In essays and books, he let rip at what he characterised as the repressive, switched-off provincialism of a nation of garden gnomes skulking behind their trellis work; smug do-goodery tapped out in parades of dungarees and fairy lights; the narrow arrogance of the intellectual left; and the forever cautious, vacillating ways of the Merkel years (a sort of “Teletubby republic”).

I would have loved to have known what he would have made of the latest political twists. On or off the page, Karl Heinz was never dull and, as the tributes made clear, he left a profound impression on a younger generation of German writers and editors.

Berlin writing a new chapter
English-language Berlin novels used to have to a familiar ring to them: Nazis, Weimar, spies. Or even all of the above. But the past few years have brought a steady stream of tales set in Berlin that strike a new note, from Red Pill by Hari Kunzru and Chris Powers’ A Lonely Man to Matthew Sperling’s Viral and Lauren Oyler’s Fake Accounts.

Next year brings Emma Harding’s novel Friedrichstrasse and Amy Liptrot’s powerful memoir The Instant. Some follow a new pattern: the expat lured to the German capital by the prospect of cheaper rents, generous stipends and an easier, perhaps cooler, English-spoken-here lifestyle — a sort of extended student slacker existence — from where they engage with more universal themes of bad relationships, paranoia, fragile masculinity and geopolitical tensions. Others tap into local themes such as Berlin’s evolving tech scene. Not always a comfortable read, but a new chapter all the same.

Old money, new ideas
For years, the tech scene seemed to be one of those things that Berlin often excels at: long on promise, fantasy and imagination, short on delivery. There was rhetoric about how the coders in the backyards of tenement blocks in Prenzlauer Berg and Kreuzberg were keystroking in the footsteps of an earlier generations of technological pioneers — Siemens, Börsig, Zuse and co — sounds great. It’s just the bit about turning that into products, sales, jobs — and taxes — that proved a bit elusive.

In Berlin’s tech scene, competition for talent is fierce — and now salaries (along with rents) are rising

That now seems to be changing. The number of successful digital companies, such as the ever-expansive Delivery Hero or Trade Republic, is growing and attracting investor interest — as became clear to me when I made my way to one of those demi-brutal communist-era concrete blocks that still line Karl Liebknecht Strasse on the way up to Berlin’s iconic television tower.

A stone’s throw from the location of the old stock exchange and up the road from the university where the young Marx and Engels acquired a taste for radical thought, the building was built to showcase the culture and lifestyle of East Germany’s “socialist brother state” Hungary. Now, it’s a cool “off location” that hosts events such as the one held by La Familigia, a local venture capitalist firm that marries up old money with new ideas. Internationally minded, well-connected and with serious intent, it’s a combination and a crowd that has really come together in Berlin only over the past decade or so. Now competition for talent is fierce; salaries (along with rents) are rising. That said, some enduring factors remain: as one speaker noted, Europe still has some work to do in seeing and acting on the promise of technology rather than focusing on the problems.

Traffic control
Creating a problem out of a solution is something of a Berlin speciality. Back in the 1990s, as the FT’s lone correspondent in the Hauptstadt, I filed an extensive news analysis piece on a proposed new airport for a reunited Berlin in training for a return to frontline duty as national capital. In keeping with the temper of the times, the plans were grandiose and aspirational: a Weltstadt aesthetic, as imagined in the provinces. 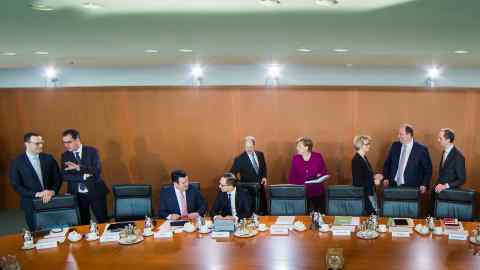 The piece earned me a fair bit of ribbing. “You fell for that,” teased one generous German colleague. “It’ll never be built.” He got that one wrong — sadly. And now we have to live with “BER” — the much-delayed, overspent Berlin Brandenburg International, which since finally opening for business last year has been doing world-class work in delivering laughable customer service, communist-era levels of queueing and undermining Germany’s reputation for efficiency.

Teething problems, perhaps. But already there are calls to accept defeat and pull the whole thing down and start again (Berlin likes nothing more than a mega building project with which to disrupt and distract itself). Either way, it’s left me checking out train options for my next trip — assuming coronavirus makes that possible.

Find out about our latest first by following @ftweekend on Twitter