Your essential guide to what matters in Europe today. Delivered every weekday.

Russia’s Kremlin-controlled ruling party has retained its supermajority in parliament after an electoral campaign marred by accusations of widespread fraud and a crackdown on the supporters of jailed opposition activist Alexei Navalny.

United Russia, the main vehicle for president Vladimir Putin’s policies, was on track to maintain its two-thirds supermajority in the 450-seat chamber with 314 seats, down from 334 at the last election in 2016, its leader Andrei Turchak said on Monday.

The three-day vote, the last before Putin’s term expires in 2024, was an important test for the Kremlin to show it still controls the political system amid anger over falling living standards, a decline in support for United Russia and several repressive measures officials say are necessary to combat foreign meddling.

Putin, who is self-isolating after an outbreak of Covid at the Kremlin last week, thanked Russians for their “trust and active stance in life”.

Navalny’s team — largely in exile after a court declared them an “extremist organisation” in June — had sought to channel anger against the government by directing supporters to vote for one of the Kremlin-approved candidates according to recommendations from a “smart voting” app.

I know this result is impossible. Hundreds of thousands of people voted for us.

The drive for tactical voting was largely dashed after Apple and Google bowed to Kremlin pressure to make the app unavailable as polls opened on Friday, while the introduction of online voting in Moscow and six other regions made it more difficult to track possible falsifications, activists said.

Golos, an independent election monitor officials designated a “foreign agent,” said it had counted nearly 5,000 possible violations at the polls. But election commission chair Ella Pamfilova told Putin that “there were significantly fewer violations compared to the last campaign, far fewer than ever” and said voting would be annulled at just three polling stations nationwide.

With 99 per cent of ballots counted, United Russia had won 50 per cent of the vote, with the Communists — the only one of the Kremlin-controlled parties in the Duma, the lower house, to oppose any of Putin’s major initiatives in recent years — nearly doubling their 2016 total to 19 per cent.

All but two of Russia’s 85 regions voted for United Russia in the proportional vote, while the party also won 198 of the remaining 225 first-past-the-post districts.

Six other parties closely aligned with the Kremlin will also take up seats in the Duma, including New People, a party formed last year in an apparent attempt to attract support among Navalny’s middle-class demographic.

The opposition accused electoral officials of falsifying the result after several candidates in Moscow abruptly lost commanding leads in the final tally after an unexplained delay in counting nearly 2m online ballots, handing United Russia a clean sweep in the capital.

Navalny claimed candidates backed by “smart voting” had won almost all the seats in Moscow and St Petersburg, the cities home to the largest opposition sentiment.

“So the robot had a think and a smoke and decided to delay publishing [the results] until the deft hands of United Russia formed the results so that they said the exact opposite,” Navalny wrote in a message from prison his team posted to Instagram. 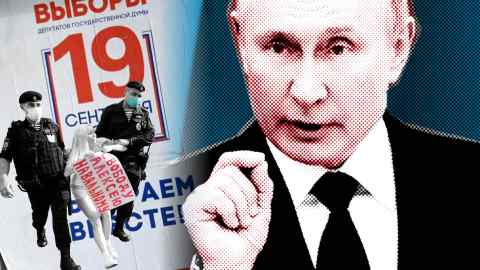 The Communists said they would refuse to recognise the online results. But city authorities quickly refused to issue them a permit for protests, citing risks from the coronavirus pandemic.

“I know this result is impossible,” Mikhail Lobanov, a Communist candidate who narrowly lost in western Moscow, wrote on Twitter. “Hundreds of thousands of people voted for us. Yes, it was a protest vote, but I believe that we, the ‘no’ candidates, are responsible for defending these votes alongside our voters.”

A spokesperson for the EU’s foreign policy chief Josep Borrell said the vote was held “in an atmosphere of intimidating critical and independent voices” and cited “independent and reliable sources reporting serious violations during the vote”.

Taurasi says ‘magic slipped away’ from Mercury
1 hour ago