It is a stand-off that has transfixed Poland. Huddled on the edge of a forest on the border with Belarus, a group of Afghans has been trapped for almost three weeks between security forces who refuse to let them into Poland and Belarusian soldiers who will not let them retreat.

Weak and hungry, the 32 Afghans — 12 of whom are seriously ill, according to local activists — are part of a surge of arrivals on the EU’s eastern border orchestrated by Belarus’s autocratic leader Alexander Lukashenko in retaliation for the bloc’s support for Belarus’s persecuted opposition.

Officials say in excess of 4,000 migrants have entered Lithuania from Belarus in recent weeks, and more than 2,100 have tried to enter Poland. Combined with fears of an exodus from Afghanistan in the wake of the Taliban’s seizure of power, Lukashenko’s funnelling of migrants to the EU border has raised the spectre of a repeat of the 2015 migration crisis, which shook EU politics and strengthened the hand of populists across the bloc.

Polish officials accuse Belarus of using the migrants as a “hybrid instrument” to destabilise its neighbours. Relations between the two will face another test in two weeks when Russia and Belarus are due to begin a series of joint military exercises involving thousands of troops.

“Lukashenko wanted to create a kind of destructive debate [in the EU],” said Marcin Przydacz, Poland’s deputy foreign minister. “The Zapad exercises are coming next month, so we have to see the broader picture.”

In the border village of Usnarz Gorny, home to a few dozen mostly elderly inhabitants, activists say the group of Afghans are being forced to endure inhumane conditions. They accuse Polish border guards — who with police and soldiers have set up a cordon about 100m from where the migrants are stuck — of preventing efforts to help them.

Attempts to deliver food, water and medicines from the Polish side, including efforts by two priests and an opposition MP, have been blocked. The migrants, whom activists say have asked for international protection, have only seven tents between them, and no access to toilets.

Aleksandra Szymczyk, a translator who has been communicating with the Afghans via loudspeaker across the cordon, said that when she tried to speak to the migrants this week, the border guards turned on the engines of their trucks to drown out what she was saying.

“Of course, the Belarusian side is cynically using this situation — that’s their strategy,” said Piotr Bystrianin from Fundacja Ocalenie, an aid group that is present in Usnarz Gorny. “What’s horrible is that the Polish side is playing this game.”

Representatives of Poland’s border guard force did not respond to a request for comment.

Deputy foreign minister Przydacz said Warsaw had offered to send humanitarian aid to the migrants via a border crossing with Belarus, but that Minsk had not agreed. He added that it would be illegal for Poland to send aid across part of the border not marked as a crossing.

“This is a new instrument to destabilise the EU, so I think that we should observe the law first and try to push Lukashenko to stop this kind of behaviour,” he said.

As the Usnarz Gorny stand-off has continued, the debate in Poland about how to respond has become increasingly charged.

The ruling Law and Justice party (PiS), whose anti-migrant rhetoric helped it win power in 2015, has again taken an uncompromising stance. It has dispatched about 1,800 troops to the region, laid kilometres of barbed wire coils along the border and pledged to reinforce it further with a 2.5-metre high fence. “Poland defended itself against the wave of refugees in 2015, and it will defend itself again now,” Piotr Glinski, deputy prime minister, said last week.

Opposition politicians have taken a mixed approach. Donald Tusk, head of Civic Platform, the biggest opposition party, called on the government to help the Afghans stuck in Usnarz Gorny. But he also criticised PiS for failing to secure the border, accusing it of “helplessness” and reacting too slowly.

Others have been more outspoken. Wladyslaw Frasyniuk, a former dissident and opposition activist, launched a furious tirade against the Polish soldiers stationed in Usnarz Gorny, calling them a “pack of dogs”, prompting Poland’s defence minister to file a complaint with prosecutors.

Observers said the tough approach of PiS, which recently lost its majority in parliament and whose support has tumbled over the past year, was more likely to chime with the public mood. 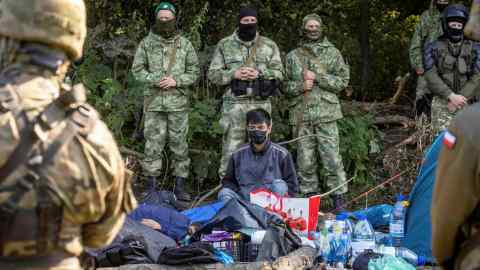 “There are a lot of people who are strongly against letting in immigrants, so I suspect this will boost support for PiS and [far-right party] Confederation,” said Renata Mienkowska-Norkiene, a political scientist at Warsaw university.

“For the opposition, it will be a tough topic, because Tusk will have to talk about it very carefully in order not to discourage people with humanitarian attitudes.”

In Usnarz Gorny, locals were divided over the migrants’ plight. “Lukashenko should look after them. Why don’t you send them to [German chancellor Angela] Merkel? Why should we take care of them?” said one man pushing his bike through the village.

Others were more sympathetic. “I feel sorry for them. They’re not guilty of anything,” said a woman who declined to give her name, adding that other migrants had crossed the border without being caught.

“Someone must have brought them here. They were probably promised a better life.”

A Chess Player Almost Won A Chess Game
49 mins ago

Ohio State-Michigan: Wolverines get tricky to score first
2 hours ago