During late summer Wayne Bright toiled day and night burying victims of the deadly Covid-19 wave sweeping across the US, so much so that his funeral home ran out of caskets.

But in recent weeks the number of people dying of the virus in his tight-knit community in Tampa, Florida, has fallen together with a nationwide dip in mortality rates. This has raised hopes among those on the frontline of the crisis that the US may finally be charting a course out of a pandemic which has claimed 710,000 American lives so far.

“If we continue along the path that we are following now then I believe the worst may be over,” said Bright, who buried 55 people last month, including some close friends.

Low vaccination rates, haphazard adherence to social distancing rules and confusing political messaging have blighted the US response to the pandemic. Just over 1 in 500 Americans have succumbed to the virus — one of the highest death rates in the world in a nation with plentiful access to vaccines.

But there are tentative signs the Delta surge may be fizzling out with the number of new Covid-19 cases reported falling by 22 per cent in the past two weeks and hospitalisations down by a fifth. The pace of deaths has also slowed. In Florida, where deaths from Covid-19 reached an all-time daily peak of 418 on September 13, they have since fallen to about 200 per day.

Notwithstanding rising infection rates and deaths in some Midwestern and north-eastern states, some health experts predict the US may be winning the battle against the Delta strain. Strict vaccine mandates, the rollout of booster shots and development of an antiviral pill to treat Covid-19 are vital tools that could tame the virus, they say.

“I think this Delta wave is probably the last major surge of Sars-Cov-2 infection that we have in the US, barring something unexpected happening,” said Scott Gottlieb, a Pfizer board director and author of Uncontrolled Spread, a book on the US response to Covid-19.

The rollout of vaccines to children and regulatory approval of Merck’s antiviral pill could end the pandemic in the US and usher in an endemic phase of Covid-19 — where the virus continues to circulate but does not represent the extreme risk it does now, he told US media this past week.

Most epidemiologists say there is little prospect of eliminating Covid-19 and it will have to be managed in a similar way to influenza through a mixture of vaccines, treatments and build-up of natural immunity over time. But there is vigorous debate over when this can be achieved and whether the recent slowdown is a decisive downward trend or temporary blip.

“We may be over the worst but there will be surges because there are still 65m Americans who are unvaccinated — so that’s a lot of human wood out there for this coronavirus forest fire,” said Michael Osterholm, director of the Center for Infectious Disease Research and Policy at the University of Minnesota.

He warned many experts had mistakenly predicted the past summer would provide respite from the pandemic just weeks before the Delta variant began ripping across the country. Pushing up vaccination rates in the US is critical to ending the pandemic, Osterholm told the Financial Times.

“What the Delta variant has shown is that if you are unvaccinated this virus will find you,” he added.

Health experts are hopeful the Biden administration’s vaccine mandate and the authorisation of jabs for children between 5 and 12 years of age will push vaccination rates up from 56 per cent of the population to levels seen in other developed nations. The rollout of booster doses to tackle waning immunity is another tool to prevent the virus from surging as people move indoors during winter months, they say.

“We have all the ingredients to do much better this winter and in coming months. But it’s ours to lose — I would never underestimate this virus,” said Ali Mokdad, professor of global health at the University of Washington.

He warns there is a danger people let their guard down again as case numbers fall by not wearing masks. Politics has hampered the US response to the pandemic and could do so again, Mokdad added.

Several Republican governors oppose the Biden administration’s vaccine mandate, which would cover two-thirds of private sector employees. They are threatening lawsuits to block a policy that would force workers at companies with more than 100 staff to get vaccinated or submit to weekly testing.

Two-thirds of company directors support vaccine mandates, according to a recent survey commissioned by The Conference Board, a think-tank. But more than half of respondents said it would be difficult to implement, amid concerns it could alienate some workers.

Lori Esposito Murray, president of the Committee For Economic Development Of The Conference Board, said if the mandate guidelines are clear and effectively implemented it could reach a core part of the unvaccinated population. 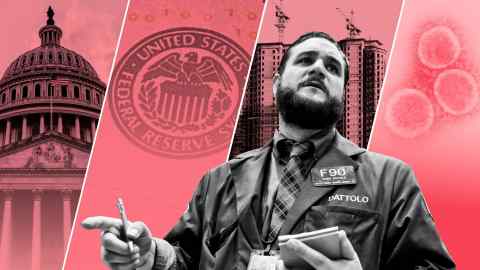 “An end to the pandemic and a return to normalcy are within reach and we just need to come together as a nation to get ourselves there,” she said.

But even if Covid-19 becomes endemic in the US in the coming months experts warn the pandemic will continue to rage in the developing world due to low vaccination rates. And this increases the chance of a new, more transmissible or deadly variant of the virus emerging that could plunge the US back into crisis.

“Right now Delta is king of the hill. But the question is whether something could develop that would be more transmissible. God forbid that should ever happen,” said Osterholm.

Report: NFL finds no one else implicated in emails
22 mins ago

Braves roll with Fried to start NLCS vs. Dodgers
1 hour ago

Braves roll with Fried to start NLCS vs. Dodgers