It seemed to be just a typical social media image of a smiling politician holding a bemused stranger’s chubby baby. Except the man was a senior Taliban official sporting a long black beard and large traditional turban and the setting was the Afghan capital, which had just been retaken by the Islamic militants 20 years after they were driven out.

“In the heart of Kabul, I fell in love with a glorious Kabuli child,” Ahmadullah Wasiq, deputy head of the Taliban’s cultural commission, tweeted under the image a day after the last remaining US troops flew out of the country.

Elsewhere in Afghanistan, Taliban-appointed provincial governors have been out on the streets chatting to shoppers and market vendors about their problems, while heavily armed Taliban fighters have posed for selfies with passers-by.

Kissing babies and meeting constituents could be gestures straight from a US election playbook. But for Afghanistan’s new rulers, such political theatre is part of a charm offensive aimed at winning over wary Afghans and persuading them the Taliban are no longer the harsh extremists that brutalised the population during their previous rule, from 1996-2001

“They want to have the support of the people,” Kabul-based political analyst Nasratullah Haqpal said. “They want to be popular with the people and to win hearts and minds. They plan to rule for many, many years and they understand the value of public support.”

People have to have confidence in the Taliban as not being completely war-crazed maniacs. Holding babies is important so that teachers turn up, bankers turn up and the guy selling kebabs turns up

Many Afghans remain deeply scarred by the Taliban’s first brutal regime, while young people have heard traumatic stories from their elders. Under the Islamists’ rule, women were barred from leaving their homes unless they were escorted by a male relative and wearing an all-encompassing burka. Beards, caps and traditional dress were mandatory for men, while television and images depicting people were prohibited. Violations of the regime’s medieval interpretation of Islamic rules were punished by public floggings, stoning and even on-the-spot executions.

Memories of the repression — along with fear of retribution against Afghans with links to the previous government and foreign military forces — fuelled the recent chaos at Kabul’s airport as it was overrun by panicked Afghans seeking to escape after the Taliban takeover.

With US troops gone, the Taliban is trying to reassure Afghans — now accustomed to mobile phones, internet access and greater personal and social freedom, especially in Kabul — that they have nothing to fear.

“Their biggest challenge right now — more than getting diplomatic recognition — is to persuade the people of Afghanistan to accept them as administrator,” said Avinash Paliwal, deputy director of SOAS University of London’s South Asia Institute. “The Taliban is trying to build a state-citizen consensus of sorts. They are harsh, they are very stringent, but they are trying to govern, for that they need to have appeal among the people.”

Paliwal, author of the book on Afghanistan, My Enemy’s Enemy, said the Taliban wanted to give Afghans the confidence that it was safe for them to go back to work — a move that is critical to keep state machinery and public services from collapsing.

“What they are doing makes perfect political sense,” he said. “They need to get the economy kicking again and for that people have to have confidence in them as not being completely war-crazed maniacs. Holding babies is important so that teachers turn up, bankers turn up and the guy selling kebabs on the side of the road turns up.”

At The Slice Bakery — a popular Kabul hang-out spot where young women and men mingle, the cashier said Taliban officials had visited and sat without troubling anyone, even women customers, while chess playing had continued unhindered. “We know the Taliban were against chess-playing in the past, but so far they haven’t bothered anyone,” said Farzad Karimi, a 23-year-old at a chess board in the café.

Haqpal, 33, whose family hid a television in an underground room during the last Taliban regime, said he believed the group had grown more worldly and was likely to be more selective in its strict enforcement of Islamic principles.

“They have studied why they collapsed and why the people hated them a lot,” he said. “They do not want to repeat the mistakes in the first era.”

But even as the Taliban work to burnish their image, many Afghans are afraid.

Many individuals linked to the former government are in hiding amid reports that some Taliban are hunting old enemies and outspoken critics for retribution. Women will undoubtedly face restrictions, if not the total repression of the first Taliban regime.

Analysts say the Taliban movement is also fragmented and divided on key ideological questions, with their new policies and the type of social order they wish to create likely to be clearer in the coming days. 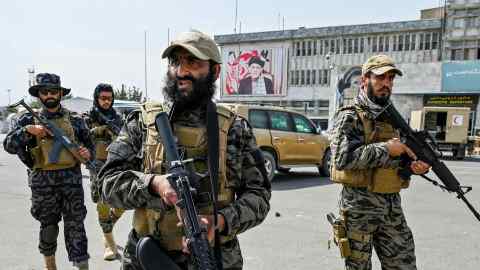 Even as some Taliban shared photos on social media of young girls with pink backpacks going to school, Afghan’s state television this week broadcast an eerie victory parade of masked Taliban fighters, including from its “martyrdom units”, displaying their car bombs, roadside explosive devices and suicide vests — the kind of weapons that have claimed thousands of lives in Afghanistan over the past two decades.

For now, though, many Kabul residents are relieved that their city has not turned into a battleground and that the Taliban appears more moderate than before. And as much as the Taliban’s sociocultural policies, the group’s ability to wrestle with a deepening economic crisis will greatly affect public perceptions in the days ahead.

“There is a lot of change with the Taliban this time and that gives hope to the hopeless Afghan,” said Lal Agha, a retired police officer in his 60s. “We do not care who is the leader, we do not care which system is ruling. We want to have peace — and a piece of bread.”

WFT: Samuel out, McLaurin questionable vs. KC
5 mins ago

What’s wrong with Clemson, and how it could get fixed
37 mins ago

MLS Cup playoffs: The matchups if the postseason began today
54 mins ago