Sign up to myFT Daily Digest to be the first to know about Political books news.

Many people who tried to work for Donald Trump were either discarded or bitterly disillusioned.

Few have given more eloquent testimony of what it felt like to work closely with the former US president than Fiona Hill, who served as senior director for European and Russian affairs on the National Security Council in the Trump White House from 2017 to 2019. Her memoir is a valuable and riveting historic document. She left the Trump administration in no doubt that her erstwhile boss was an American dictator in the making.

Throughout the Trump presidency there was much speculation about his relationship with Vladimir Putin and whether the Russians “had something” on the US president. Hill favours a simpler explanation. Trump, she writes, suffered from “autocrat envy”. He was “fixated on authoritarians in general, not Putin in particular.”

According to Hill, Trump saw strongman leaders like Putin, Recep Tayyip Erdogan of Turkey and Xi Jinping of China as an exclusive club. “People like Putin, who was simultaneously an autocrat and reputedly super-rich, were an elite of their own. This was the group Trump wanted to see himself in — the internationally very rich, very powerful and very famous.” This was not a mere matter of strongman chic. Trump “wanted to govern like them. He wanted raw power”.

Hill shot to prominence after testifying in the Trump impeachment hearings of October and November 2019. Her testimony revealed a compelling combination of integrity, intelligence and dry humour. For viewers in Britain, there was an added intriguing detail. Hill speaks with a distinctive north-eastern accent. Who was this daughter of County Durham who had somehow made it to the inner sanctum of the White House?

This was the group Trump wanted to see himself in — the internationally very rich, very powerful and very famous

There Is Nothing for You Here answers that question. It is a memoir that mixes the personal and the political — telling her story along with that of the Trump years and US-Russian relations. In other circumstances this might have been an awkward combination. But Hill’s personal, professional and political lives form a coherent whole so that each part illuminates the other.

She is the child of a coal miner, who “having lost his job . . . lost his sense of self-esteem, belonging and wellbeing.” Hill’s origins mean that she intuitively understands the discontents caused by deindustrialisation in Britain, the US and Russia. She believes that the core support for Putin, Trump and Brexit came from similar constituencies, with similar grievances — “older, more male, less educated than others.”

For the British reader, Hill’s memoir makes for sobering, sometimes shaming, reading. Without self-pity, she makes it very clear that her background imposed huge disadvantages on her. As a child she was offered a scholarship to a private school but was unable to take it up because her family could not afford the school uniform or the books. At an Oxford admissions interview and then, on occasions, as a student at St Andrews university, she was treated with hostility and contempt by some of the other students — although it is a crumb of comfort that the actual faculty seem to have been helpful and considerate.

It was not until Hill got to the US, courtesy of a graduate scholarship to Harvard, that her talents were fully recognised and her distinctive accent was no longer a hindrance. After a doctorate in history, she built a reputation as a leading expert on Russia in academia and Washington think-tanks. Hill’s experience in the US turned her into an American patriot. But she does not default to the American slogan that her life story proves that, if you follow your dreams, you can be “whatever you want to be”. There is a touch of English realism and self-deprecation in her verdict that her success was actually a “fluke”. The last part of her book is a passionate argument for the removal of the structural disadvantages that hold back the poor in Britain and the US.

When I finished There Is Nothing for You Here, I was left with one remaining mystery. Why did she do it? Many of Hill’s friends in Washington would have warned her against working for Trump. Was it naïveté, ambition, a sense of duty or, despite everything, a certain ideological affinity with Trump? 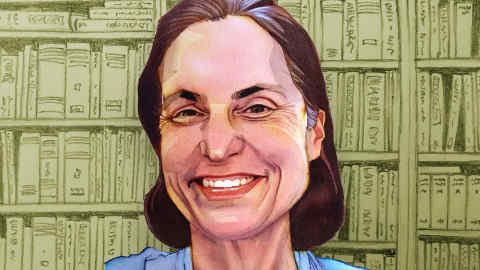 On this, Hill is frustratingly taciturn. She clearly got on well with her direct bosses at the White House, John Bolton and HR McMaster, who headed the NSC. But she was originally recruited to the NSC when it was run by Michael Flynn, a former general and Trump loyalist, who was swiftly forced out of office and has now become a rabid conspiracy theorist. Hill notes the part that Flynn played in her recruitment but makes no further comment. Was there truly nothing about him that set off alarm bells?

Whatever her reasons for working in the Trump White House, I am grateful she did. The result is a memoir that will give pleasure to readers today — and will be an important document for historians of the future.

There Is Nothing for You Here: Finding Opportunity in the 21st Century by Fiona Hill, Mariner $30, 432 pages

A Chess Player Almost Won A Chess Game
30 mins ago

Ohio State-Michigan: Wolverines get tricky to score first
1 hour ago

Best of Week 13: Road field storms, the best NIL commercial yet and much more
2 hours ago