Healthcare employers and unions have called on the federal government to tackle crippling staff shortages, as a deadly wave of Covid-19 sweeps the US and tens of thousands of frontline workers face dismissal for refusing to be vaccinated.

Acute shortages of nurses have forced hospitals in the worst-affected states to ration patient care and request support from the National Guard, which has 13,000 personnel deployed on pandemic support tasks. But the scale of the crisis, which has resulted in Covid-19 daily death rates rising to levels last seen during last winter’s surge, has prompted requests for financial aid and reforms to deal with problems predating the pandemic.

The introduction of vaccine mandates for healthcare staff could lead to a further exodus of nurses from the profession, say health experts. On Monday, authorities in New York warned that thousands of unvaccinated healthcare workers could be fired as a deadline passed, with up to 16 per cent of the state’s 450,000 hospital workers still yet to receive a jab.

“Any staff members terminated because of a refusal to be vaccinated would not be eligible for unemployment insurance absent a valid doctor-approved request for medial accommodation,” said Kathy Hochul, New York governor.

The vaccine mandate battle in New York will have important repercussions for healthcare nationwide, as similar rules are rolled out by state and federal authorities. It comes as trade union and employers warn that the healthcare system in some states is already close to breaking point, driving many exhausted frontline workers to leave the industry.

Just over 15 per cent of nurses left their job during the first year of the pandemic, up roughly 5 percentage points on the previous year, according to a survey by McKinsey. One in five nurses reported they might leave their role providing direct patient care in the next year, the survey found.

“Nurses are totally exhausted, both mentally and physically, after 18 months of this pandemic . . . Now they are seeing death and dying pretty much every day at the same rate as last year, before we had a vaccine,” Ernest Grant, president of the American Nurses Association, told the Financial Times.

He said it was frustrating for nurses to see so many deaths that could have been prevented by vaccines, noting the AMA supports vaccine mandates.

The AMA, which represents 4m registered nurses, said there was a staff shortage before Covid-19 because of structural issues, including low pay. But the pandemic has prompted more nurses to quit the profession out of exhaustion and concern over catching the disease and bringing it home to their families. The shortfall could be as high as 1m nurses nationwide, said Grant.

The AMA has called on the Biden administration to convene a crisis meeting with hospitals, unions, government officials and other experts to work on solutions. Severe nursing shortages could “have long-term repercussions for the profession, the entire healthcare delivery system and, ultimately, on the health of the nation”, it warned this month in a letter to Xavier Becerra, US health secretary.

The strain is felt most in states where vaccination rates are low and hospital admission rates remain elevated despite recent declines in other parts of the US.

West Virginia has the highest Covid intensive care unit rate in the US, with 16 patients in ICU per 100,000 people, according to FT analysis. The mountain state also has the lowest elderly vaccination rate in the country, with just 79 per cent of over-65s having received at least one dose.

The Rocky Mountains and northwestern states are also hotspots. Idaho has 45 per cent more Covid ICU patients than it did last winter, while Montana and Wyoming have also surpassed their winter peaks. Both states’ elderly vaccination rates are below the national average.

The mounting burden on medical staff has forced authorities in Wyoming, Idaho, Kentucky and Tennessee to recruit soldiers from the National Guard to help with non-clinical tasks.

Michael Scherneck, president of the Southeast Georgia Health System, said a third of his registered nurses had left since the start of the pandemic, and now about half of the group’s recruits were travel nurses on short-term contracts. Before the pandemic, Scherneck said, he paid $70-$80 per hour for a travel nurse but, “as of late when we hit this surge, we paid as much as $212 per hour”.

Travel nursing, where nurses move between different hospitals on short-term contracts to fill staffing gap, has surged during the pandemic. There are 48,000 openings for travel nurses listed nationwide, almost three times the number available at the same time last year, according to Aya Healthcare, a healthcare staffing firm. 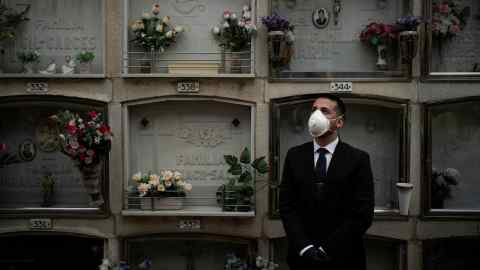 “Right now we’re seeing travel nurses’ pay packages ranging from about $3,000 to $6,000 per week and that has more than tripled since before the pandemic,” said Sophia Morris, Aya’s vice-president of account management.

Critics warn that the large numbers of registered nurses resigning from permanent positions to take better-paid travel positions is undermining hospitals’ ability to respond to the crisis.

“This is a self-perpetuating problem because when I get low on staff I have to use a travel contract, which pulls nurses from somewhere else,” said Phillip Coule, chief medical officer at Georgia’s Augusta University Medical Center.

“A greater investment in efforts to address suicide, burnout and behavioural health disorders among healthcare professionals is critical to protecting our current and future workforce,” said Robyn Begley, senior vice-president of workforce at AHA.

Morale among registered nurses working alongside better-paid colleagues on travel contracts is suffering amid the Covid-19 crisis.

“I thought the HIV epidemic was bad when it first started but Covid-19 is really overwhelming,” said Marsha Martin, who works in the ICU unit at University of Florida hospital in Gainesville.

“Some of the people we are looking after are very young. Thirty-year-olds, 20-year-olds and even little children are getting it — it’s really sad,” she said.

Martin, who has worked as a nurse for 37 years, is concerned that younger nurses will leave the profession or that those who do stay will join the increasing numbers becoming travel nurses.

“Travel nursing pits one hospital against another hospital and really is a form of price gouging. It’s unbridled capitalism. I just don’t think it is right,” she said.

Michigan Rolls to a Playoff Spot With Big Ten Title