A Matt Targett opener from a set-piece and a superbly taken John McGinn strike from the edge of the area brought Crystal Palace’s seven-game unbeaten streak to an end on Saturday.

The Frenchman made two changes from the side that drew 3-3 with Burnley last time out – Joachim Andersen missed out through a knock, which handed James Tomkins a start, and Michael Olise replaced Jordan Ayew.

EAGLES NOT AT THE RACES

The most telling stat of how Crystal Palace performed against Steven Gerrard’s Aston Villa was that they didn’t manage a shot on target until the 80th minute – Christian Benteke’s acrobatics testing an underworked Emiliano Martinez.

There was a lack of understanding in the midfield, and Villa’s trio of Marvelous Nakamba, John McGinn and Jacob Ramsey dominated the battle in the centre of the pitch.

Cheikhou Kouyate and Luka Milivojevic – who both have defending at the forefront of their minds – forced Conor Gallagher to drop deep to pick up the ball and bring Palace 10 yards further into their own half.

Benteke, Wilfried Zaha and Michael Olise were unable to string a passage of attacking play together with solo efforts, such as Benteke’s drive through the heart of the Villa defence, the closest Palace came before the 80th minute.

There was a lack of cohesion and intensity that Vieira’s Palace have shown in abundance during his short reign. And despite the Eagles pulling one back through Marc Guehi in added time, Villa always felt in control of the game.

While Tomkins didn’t necessarily look out of place during his first Premier League start under Vieira, the Eagles missed Joachim Andersen’s ability to play a long diagonal ball out to the wide players to turn defence into attack quickly.

With Palace set to find out the extent of his ‘knock’ on Monday following further tests, the decision not to sign another natural ball-playing centre-back could come back to haunt the Eagles over the hectic festive period.

The usual defensive problems remained. The South Londoners conceded their 10th goal from a set piece, which gave Villa the confidence to deploy the dark arts, slow down the game, and force Palace into unnecessary mistakes.

If the 32-year-old is set to feature more consistently alongside Guehi then perhaps, once his match sharpness returns, Tomkins can help make Palace an assured unit again when defending from dead-ball situations.

When Eberechi Eze stepped towards the touchline before his second-half introduction, it instantly increased the noise levels at a previously fairly subdued Selhurst Park.

Despite looking bright, thinking about playing forward and not afraid to put his foot on the ball, Eze’s 30-minute cameo reminded Palace fans that patience is going to be crucial while the young showman gets up to speed with the ferocious nature of Premier League football.

The intent was there from the 23-year-old, who has taken on the number 10 squad number this season, but his passing range was rusty and his tempo off.

Considering the remarkable recovery from his Achilles injury that was set to keep him out until 2022, having the Greenwich-born midfielder during the compact run of games will only serve as a benefit and help him get back to his very best.

Once Eze is fit and firing, the thought of him, Zaha, Olise and Gallagher all surging forward in a coherent attacking force is an exciting prospect. 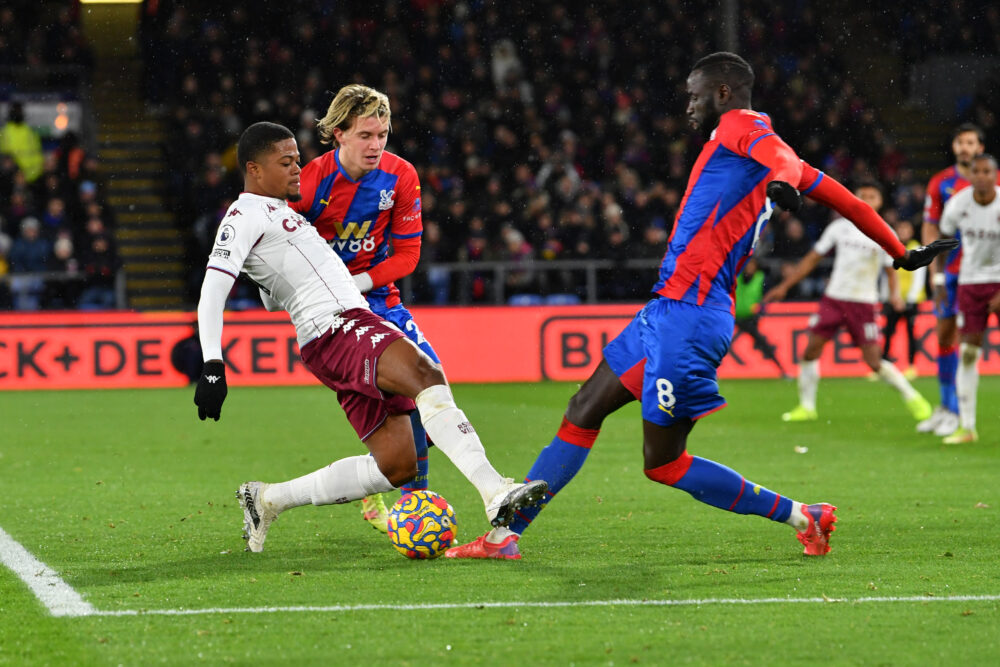 INTRIGUING TO SEE HOW PALACE BOUNCE BACK?

While the opening day loss to Chelsea and the 3-0 defeat to Liverpool were both chalked off under the ‘free hit’ file when the season began, Vieira’s Palace have shown – such as the victory against Manchester City – that they have the ability to take on any side.

It will be intriguing to see how this Palace outfit bounces back from a defeat in a game that many would have expected them to stamp their mark on and extend their unbeaten run.

Palace weren’t their usual dominant selves on Saturday – lacking the intense pressing nature and attacking swagger they have displayed with such assuredness this season.

With the trip to Elland Road to take on Leeds United only 48 hours away, it’s a chance to swiftly move on and rediscover their identity.

Compared to last season, when the Eagles had to contend with a lack of depth and an ageing squad, Vieira has options for formation flexibility and competition for places, allowing the younger squad to be better prepared for two games in quick succession.

AB says ‘nothing wrong with my mental health’
2 hours ago