After almost a year and a half of the coronavirus disease 2019 (COVID-19) pandemic, the actual case count of those infected with its causative virus – severe acute respiratory syndrome coronavirus 2 (SARS-CoV-2) – remains unclear. Though well over 167.2 million cases have been reported worldwide, this is certainly believed by many to be a massive undercount.

A new epidemiological study uses the classical Susceptible-Infected-Removed-Contained (SIR-C) mathematical model to find the peak size and date of cases, both documented and unidentified, and the gap between them.

A more accurate picture of the extent of the pandemic’s spread has a clear utility in the realm of pandemic management and public health policy. As the study authors note:

The dynamics of COVID-19 incurred the intrinsic gap in the peak sizes and the peak dates between confirmed and unconfirmed cases. Evaluation of underestimation could provide insight for meaningful decision-making when uncertainties and risks are not ruled out.”

The researchers – from the Fujian University of Technology in China – recently published their findings in Results in Physics.

Earlier projections indicated that SARS-CoV-2 might continue to cause repeated periodic outbreaks for years, hindering the world’s return to normalcy. This is quite unlike any previous outbreak, which peaked and then showed a decline.

The range and scale of non-pharmaceutical interventions (NPIs) employed against the pandemic have varied from country to country, but on the whole, rigorous and early interventions have led to control of viral transmission and limited the size of the local outbreaks.

An accurate measure of viral transmission is essential to shape containment and preventive policies. This is especially so in view of the large number of asymptomatic cases and the long presymptomatic period, both of which allowed transmission to be more widespread than in the case of symptomatic patients.

This could be the reason for repeated outbreaks in different parts of the world, as index patients import the infection during the presymptomatic phase.

Other factors influencing the spread include reproduction number and the duration of infection (DOI). The reproduction number is the mean number of secondary infections caused by each index case. The DOI is the reciprocal of the removal rate (the sum of recovery and mortality rate). When these are higher, the outbreak is sustained for a longer time.

The model was built on the following parameters. The number of secondary infections from each index case was 6.2 in the absence of any containment measures. With containment, it was 2.48. The DOI was assumed to be 16.

With data from the outbreak, covering roughly the period from February to April (both months included), the confirmed cases were estimated to peak around July 21, but the unconfirmed cases around May 6. Thus, though both peaked at about 34,000 cases, there were about 2.5 months between them. This indicates a “fundamental episode of underestimation and gap,” say the researchers.

The factors that determine the extent of undercounting include the viral transmission rate, the rate of recovery and mortality,

This could indicate that in the real world, the epidemic in a region may peak much earlier than the reported peak dates, with identified cases increasing steadily from the first to the second peak, while non-confirmed cases decline.

Until the non-confirmed cases reached their peak, the underestimation size continued to rise. The model projected a flattening of the initially confirmed case trajectory from its exponential rise once the number of underestimated cases began to fall. 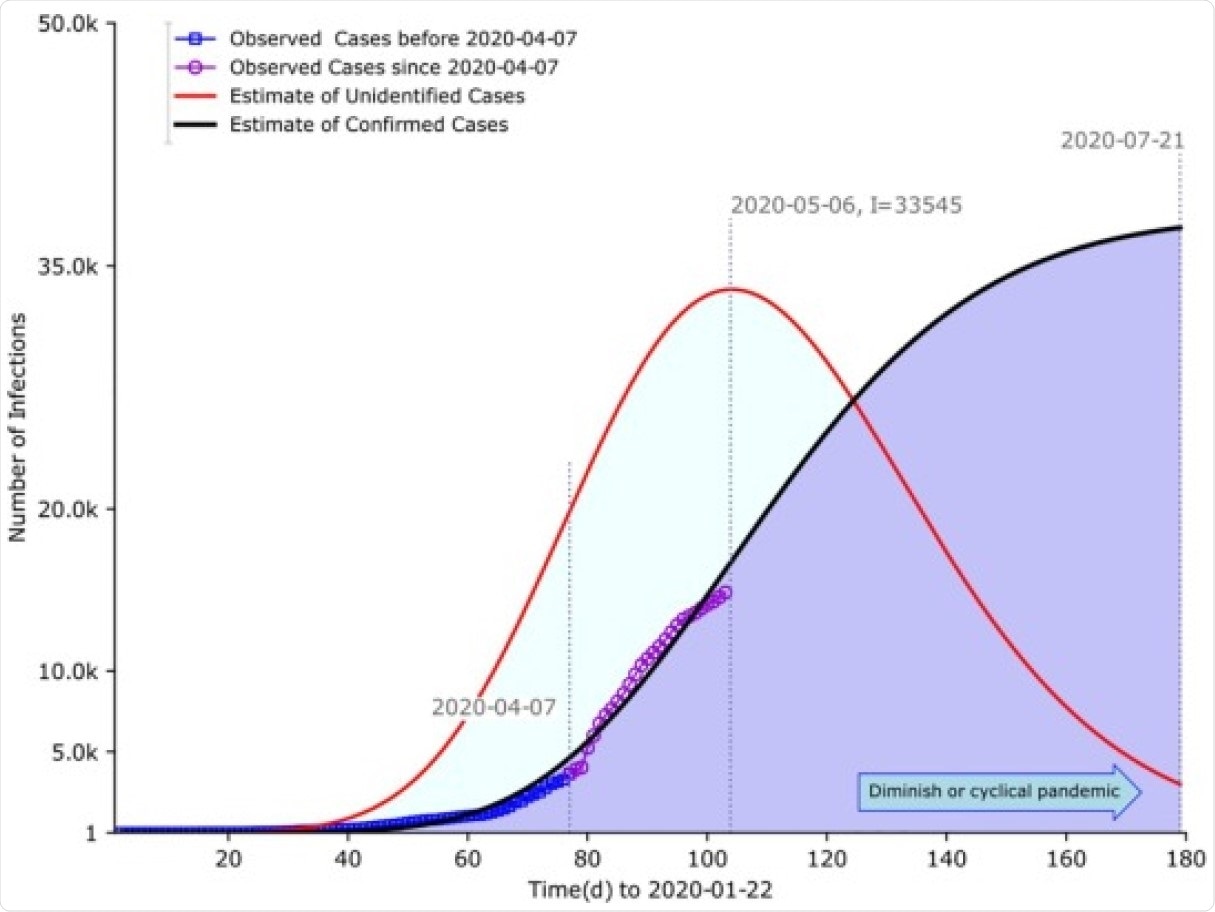 Estimates of confirmed C(t) and I(t) unconfirmed cases of COVID-19 from late January to early May 2020 Parameters estimates were performed in calibration to assumed cases predating May 3 based on least-squares fitting. Basic reproduction number without containment and duration of infection were set to be 6.2 and 16 days respectively. The effective reproduction number with containment was estimated to be 2·48. The model predicted the inherent underestimation in terms of size and timing between the confirmed and the unconfirmed cases. The former peaked around July 21. In contrast, the latter saturated around May 6, almost two-and-half months earlier. Peak sizes in magnitude for both were at the commensurate level, approximated to 34,000 cases.

With an increase in pharmaceutical containment by 1%, the peak was estimated to arrive 18 days earlier, that is, to April 18. The case peak also fell by a third. “Hence, for highly infectious diseases like COVID-19, implementation of non-pharmaceutical control measures could achieve meaningful effects.”

At 5% increase in NPIs, the peak was advanced by 21 days, and the peak size declined by over 37%. When it was increased by a fifth, or more, the outbreak would die out faster. Thus, more stringent NPIs would reduce the number of unconfirmed cases more dramatically.

For pharmaceutical quarantine, a rate of 0.03 per day or more speeded up this decay, provided that healthcare capacity showed a marked improvement. With healthcare remaining at a stable level, NPIs would achieve a reproduction number below 1 with less difficulty.

The gap in size of underestimation increased with time until the number of unidentified cases peaked, but decreased thereafter. If the DOI was increased, the peak number increased and the peak occurred later. This prolonged the outbreak and made it more difficult to contain.

What are the conclusions?

Both pharmaceutical quarantine and non-pharmaceutical containment were shown to impact the rate of rise of the unidentified cases and the size of the peak. Thus, if the local healthcare capacity is not capable of any significant rise, NPIs should be the top priority, and may be expected to achieve control of the outbreak to a marked extent.

Both the infectivity and transmissibility of the virus, and the containment measures, interact to determine the trajectory of the outbreak. The difference between the number of confirmed and unconfirmed cases played a role in shaping the curve as well, as shown by the large gap between the peak of confirmed and undocumented cases.

Other factors such as a high density of population also influence the prediction, and in such places, this may compete with stringent NPIs to affect the final trajectory. Once the case number crosses a certain threshold of the population at large, NPIs are no longer possible to maintain.

Future studies should explore how asymptomatic, presymptomatic and mildly symptomatic patients affect the curve, as well as other factors that are not included in this study but influence viral transmission. However, this study was able to predict behavioral changes even when such patients were not identified.

The contribution of this study partially lied in the point that we asymptotically identified the quantitative and qualitative nature of the underestimation. Containment measures were preferred at an earlier stage,” conclude the team.