Researchers in Finland have conducted a study showing that the neutralizing bodies generated following infection with severe acute respiratory syndrome coronavirus 2 (SARS-CoV-2) – the agent that causes coronavirus disease 2019 (COVID-19) – generally persist for at least a year.

“Studies of individuals who have recovered from natural SARS-CoV-2 infection are crucial in determining how long antibodies persist and whether these antibodies might protect against re-infection,” writes Anu Haveri and colleagues from the Finnish Institute for Health and Welfare in Helsinki.

Now, the team has shown that in a cohort of more than 360 recovered individuals, immunoglobulin G (IgG) antibodies binding the wild-type SARS-CoV-2 spike protein persisted in 97% of patients for at least twelve months.

The viral spike protein is the main structure the virus uses to infect host cells and a primary target of antibodies following infection or vaccination.

Furthermore, neutralizing antibodies against SARS-CoV-2 also persisted in 89% of individuals for at least a year.

“This strongly suggests that protection against re-infection is long-lived,” write the researchers.

By contrast, neutralization capacity was significantly decreased against the B.1.1.7 (alpha), B.1.351 (beta), and B.1.617.2 (delta) variants of concern that arose in the UK, South Africa and India, respectively.

However, the team points out that while re-infection could occur in the absence of neutralizing antibodies, cellular immunity has been shown to less affected by mutations present in these variants and will likely provide long-term protection against severe disease.

More about the antibodies generated by SARS-CoV-2 infection

Infection with SARS-CoV-2 induces antibodies against the spike protein and another surface structure called nucleoprotein that plays a vital role in packaging the viral genome.

Neutralizing antibodies generated against SARS-CoV-2 target the receptor-binding domain (RBD) of the spike and stop it from attaching to the host cell receptor angiotensin-converting enzyme 2.

Neutralizing antibody titers, which are highly predictive of protection against infection and clinical disease, have been reported to persist for at least six to twelve months following infection.

“However, a protective threshold for humans is still under debate and subject to standardization of serological methods,” says Haveri and colleagues.

Furthermore, SARS-CoV-2 has evolved certain mutations that are causing concerns regarding viral transmissibility and potential escape from infection and vaccine-induced immunity.

“Evidence from convalescent sera from individuals who have recovered from natural infection may help determine how long antibodies and immunity persist and whether antibodies might protect against re-infection,” writes the team.

The researchers assessed the persistence of serum antibodies among 367 individuals who had recovered from wild-type SARS-CoV-2 infection at six and twelve months following diagnosis. Thirteen percent of the participants had recovered from severe disease that required hospitalization.

The team determined the proportion of individuals with anti-spike IgG (S-IgG), anti-nucleoprotein IgG (N-IgG), and neutralizing antibodies (NAb). In a subset of 78 participants, they also measured NAb titers against a wild-type SARS-CoV-2 virus (B.1) and the B.1.1.7, B.1.351, and B.1.617.2 variants of concern.

What did they find?

The study found that S-IgG, N-IgG and NAb were detected in 91%, 98% and 67% of the participants, respectively, six months after diagnosis of infection.

The proportion of samples positive for S-IgG and Nab was still high twelve months after diagnosis, at 97% and 89%, respectively, but had decreased to 36% for N-IgG. 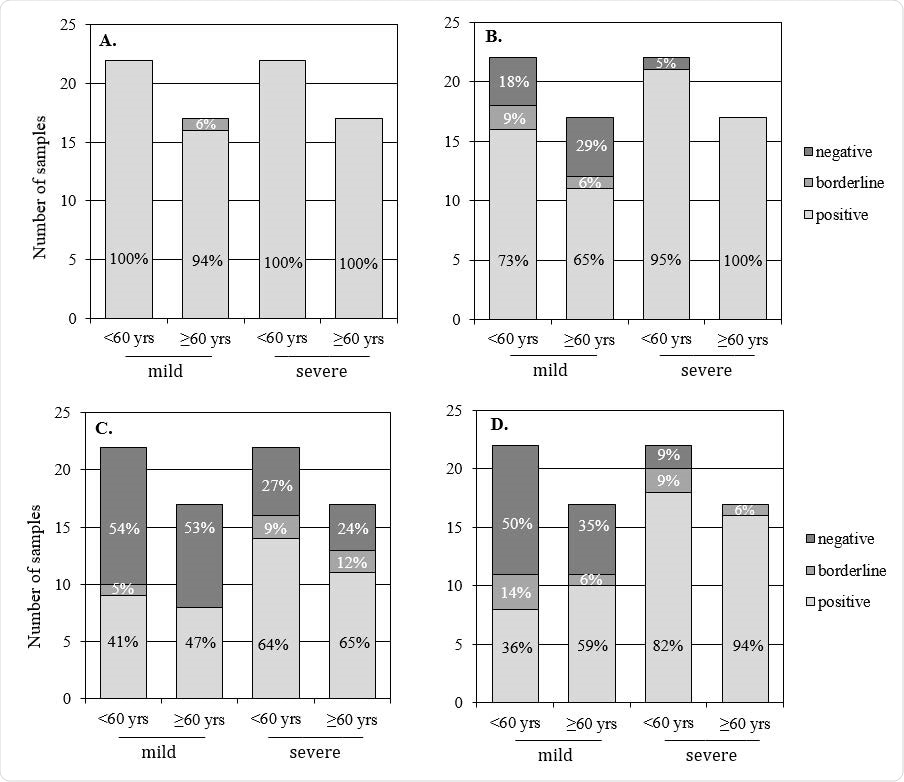 “We showed that S-IgG antibodies and, most importantly, NAbs persist in most subjects for at least a year following SARS-CoV-2 infection,” says Haveri and colleagues. “This strongly suggests that protection against re-infection is long-lived.”

The mean concentration of IgG and NAb levels was higher at six months post-infection among those who had recovered from severe versus mild disease. The difference was 2.0 to 7.4-fold depending on the age group, and persisted for at least twelve months following diagnosis.

“In accordance with previous observations, subjects with severe infection had higher N-IgG, S-IgG concentrations and NAb titers than subjects with mild infection and are expected to remain seropositive for longer,” says the team.

NAb titers were significantly lower against variants of concern

Among the 78 individuals selected to compare the neutralization of wild-type virus and the three variants of concerns, NAb titers were significantly lower for all three variants.

“The results of our study support previous findings indicating that protection against infection mediated by neutralizing antibodies may be impaired against the variants of concern, especially after a mild disease,” says Haveri and colleagues.

However, the team says that “while in the absence of neutralizing antibodies re-infection is possible, cellular immunity is not similarly affected by mutations in the RBD site and is likely to provide long-term protection against severe disease.”