Researchers in the United States have conducted a study showing that the coronavirus disease 2019 (COVID-19) vaccines developed by Pfizer-BioNTech and Moderna generate a coordinated adaptive immune response that is capable of eliciting recall responses to future infection with severe acute respiratory syndrome coronavirus 2 (SARS-CoV-2).

The team from the University of California found that immunization with either Pfizer-BioNTech’s BNT162b2 or Moderna’s mRNA-1273 vaccine-induced enrichment of spike-specific B cells.

The viral spike protein mediates the initial stage of the SARS-CoV-2 infection process and is the primary target of antibodies following natural infection or vaccination.

A pre-print version of the research paper is available on the bioRxiv* server, while the article undergoes peer review.

Since the COVID-19 outbreak first began in December 2019 in Wuhan, China, intense global efforts to rapidly develop effective vaccines against the causative agent SARS-CoV-2 have led to the emergency use authorization of several vaccines.

These include the messenger RNA- (mRNA) based vaccines developed by Pfizer (BNT162b2) and Moderna (mRNA-1273). Findings from clinical trials indicated that a 95% maximal protection is achieved within 1 to 2 months following the second dose of either vaccine, including protection against several circulating SARS-CoV-2 variants of concern.

However, the mechanisms by which these vaccines elicit long-lasting cellular immune responses to the virus remain poorly understood.

Natural infection and vaccination provide two different pathways to immunity, which studies have previously shown to be characterized by distinct T and B cell responses.

The team used single-cell RNA sequencing and functional assays to assess humoral (antibody) and cellular responses to two doses of either the Pfizer-BioNTech or Moderna mRNA vaccine (14 days following a second dose) in four individuals. The results were compared with the immune responses observed in three convalescent individuals who had experienced asymptomatic or mild infection.

What did the study find?

Both infection and vaccination induced anti-SARS-CoV-2 binding and neutralizing antibodies.

These antibodies were detected as early as two weeks following a first vaccine dose, with levels increasing several-fold after a second dose.

While neutralizing antibody titers following the first vaccine dose were comparable to those among convalescent individuals, significantly higher levels were observed in the vaccinees following the booster dose.

However, several important B cell adaptations were shared between vaccinees and convalescent individuals.

Analysis by flow cytometry revealed a reduction in the level of naïve B cells, but an expansion of memory B cells in both groups.

Additionally, single-cell RNA sequencing showed a reduction in IgA+ memory B cells following vaccination, a finding that has recently been described for convalescent individuals. 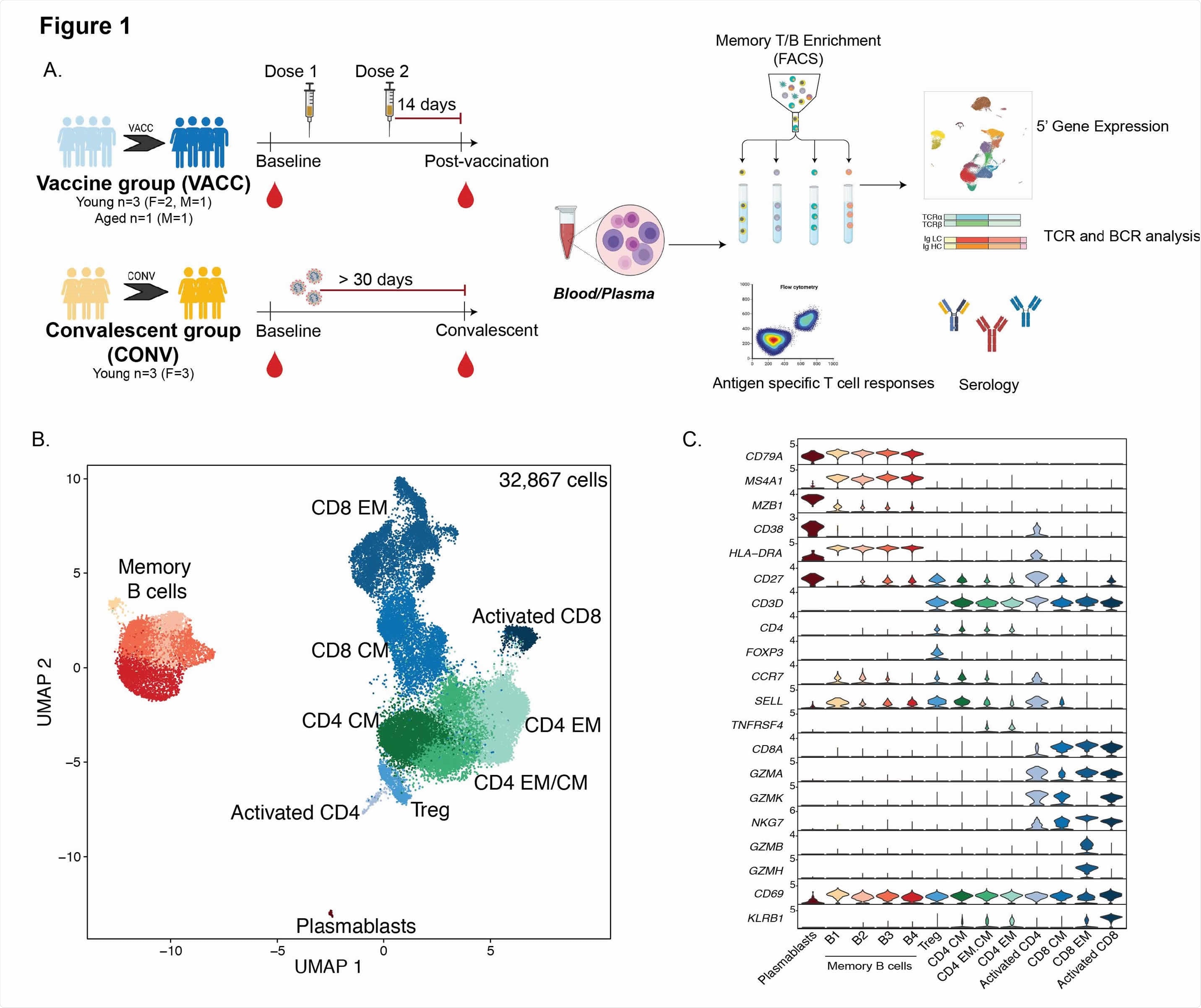 Immunological changes with SARS-CoV-2 mRNA vaccination (A) Experimental design for the study. Blood was collected from SARS-CoV-2 naive subjects before vaccination, 2 weeks post dose 1, and 2 weeks post prime boost vaccination (VACC group) or in SARS-CoV-2 exposed but asymptomatic individuals (CONV group) before and after convalescence. Immune phenotypes of PBMC and antigen specific T and B cell responses were measured using multi-color flow cytometry. Longitudinal serological responses to the vaccine were measured using ELISA and neutralization assays. Memory T and B cells from a subset of PBMC samples (n=4/group for vaccine volunteers, n=3/group for convalescent health care workers, matched) were profiled using scRNA-Seq at the baseline (pre-vaccination or and post-vaccination time points. (B) UMAP projection of 32,867 memory T and B cells with major subsets annotated. (C) Violin plots of key gene markers used for cluster annotations. Normalized transcript counts are shown on the Y-axis.

Importantly, the team observed a modest expansion of plasmablasts and a significant increase in spike-specific B cells just two weeks following a second vaccine dose, indicating the establishment of durable memory and potential recall responses to infection.

Frequencies of activated CD8 T cells were comparable between the vaccinated and convalescent groups. However, natural infection induced the expansion of larger CD8 T cell clones, including distinct clusters.

This is likely due to the recognition of a broader set of epitopes presented by the virus that is not found in the mRNA vaccines, say the researchers.

“Our study highlights a coordinated adaptive immune response where early CD4 T cell responses facilitate the development of the B cell response and substantial expansion of effector CD8 T cells, together capable of contributing to future recall responses,” concludes the team.

Yankees continue to be impressed by Estevan Florial
23 mins ago

Yankees continue to be impressed by Estevan Florial

Giants’ training-camp goals: Get ready and stay healthy
48 mins ago

Is there a NASCAR race today? Date, start time, TV schedule for next race after 2021 Olympic break
1 hour ago

Is there a NASCAR race today? Date, start time, TV schedule for next race after 2021 Olympic break

Breaking down the NFC East
2 hours ago

Breaking down the NFC East