Sign up to myFT Daily Digest to be the first to know about Transport for London news.

The head of Transport for London has called on the government to provide nearly £17bn in funding over the next decade after the body lurched through four separate short-term finance deals during the Covid-19 pandemic.

“The pandemic drove a coach and horses through the finances,” Andy Byford, TfL’s commissioner, told the Financial Times in an interview.

TfL’s finances were badly exposed to the pandemic because it is heavily reliant on ticket sales and other revenue streams after the Conservative government removed its annual grant, which was at one point worth £700m, in 2018.

The slump in traffic across the capital’s public transport network as the coronavirus pandemic hit meant TfL had to turn to the government for emergency funding. At one point, London Underground passenger numbers fell to 5 per cent of pre-crisis levels.

It’s hard to run [TfL] when you don’t know how much money you’ll get on a six-month horizon. It’s inherently inefficient

But while ministers have readily poured billions into the national rail network since the start of the crisis, TfL was forced to engage in a series of difficult negotiations to secure bailouts, which came with strings attached — a sign of the political tension between the government and London’s Labour mayor Sadiq Khan, who chairs TfL.

In return for about £5bn, provided in four tranches, the government has forced TfL to increase fares, find what Byford called “eye-watering” savings including £300m of cuts this year and raise up to £1bn of new revenue, which could lead to a new charge on cars entering Greater London.

Byford said he was grateful for the rescue packages, but added that the body needed more predictable income streams. “It’s hard to run [TfL] when you don’t know how much money you’ll get on a six-month horizon,” he said. “It’s inherently inefficient.”

Once the latest round of emergency pandemic funding runs out in December, Byford said he would need an extra £500m to cover day-to-day spending for the last quarter of TfL’s financial year ending in March 2022, followed by £1.2bn for the 2022-23 financial year.

At that point, he said, the transport authority should have achieved enough financial stability to cover operational costs based on current projections for passenger numbers, which forecast a return to 80 per cent of their pre-pandemic levels.

Byford, who only took over in June last year, admitted that this was a “tough” target but said it was achievable. “If we pull this off, it would be a minor miracle.”

He said that with the summer holidays over, people beginning to return to offices and nearly all pandemic restrictions scrapped in England, the next few weeks would be “critical” in establishing the long-term impact of the pandemic on commuting.

But whatever happens, TfL will remain in need of state support to help fund capital spending as it was before the pandemic.

Byford puts the requirement at £15bn over the next decade, at a rate of £1.5bn per year. This would help fund projects such as the gradual replacement of London’s diesel-powered red bus fleet with electric vehicles and the purchase of new trains for some of the tube lines, including Bakerloo and Central.

He added that without this investment London’s transport network would enter a “doomsday scenario” of managed decline.

But this level of spending would not be enough to fund any new megaprojects such as the proposed extension of the Bakerloo line. Planning for all large schemes was put on hold during the pandemic.

The £1bn extension of the Northern line into Battersea, which is scheduled to open next week, is one of the last major infrastructure projects still in the pipeline.

But it is the new, long-delayed £19bn Crossrail east-west railway, which was at one point the biggest infrastructure project in Europe, that has taken a big toll on TfL’s finances. It is £4bn over budget and scheduled to open more than three years late in the first half of 2022.

Byford, who inherited the project, said the new passenger revenue from the line would be critical to TfL’s finances when it finally opens fully next year. “There will be no further delays to schedule or [change] to budget.”

The TfL chief began his career as a graduate trainee at London Underground in the 1980s before taking up various roles abroad, including running both Toronto and New York’s public transport bodies, before returning to the UK.

Byford said he was not seeking a “blank cheque” for TfL, acknowledging that the pandemic had heavily constrained public finances, as chancellor Rishi Sunak finalises his spending review due to be unveiled next month. “We can’t be tone deaf in this. We can’t just carry on as though nothing has happened.” 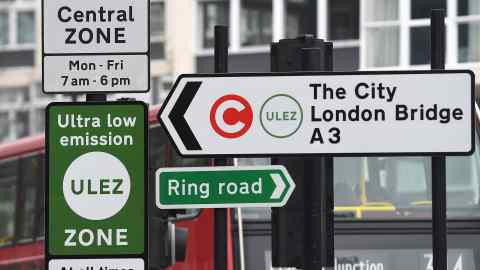 The government said: “We have repeatedly shown our commitment to supporting London’s transport network through the pandemic.”

The demand for extra funding for the capital’s transport network also comes at an awkward time politically. One of UK prime minister Boris Johnson’s key pledges after his 2019 election victory was his “levelling up” agenda, aimed at lifting the economic prospects of more deprived regions beyond London.

But Byford insisted investing in the capital would help stimulate economic growth elsewhere. “London provides £39bn net to the exchequer every year. TfL can play its part in that,” he said.

“There’s a sensibility in government, a perception, that London has always been traditionally favoured and has benefited from a better transport system than elsewhere . . . but it is the capital city and has pockets of deprivation,” he added. “It’s not as simple as saying: ‘London’s had its fair share. Time to divvy out all the wealth in the north and the Midlands’.”

Bills’ No. 1 defense faces stiffer test vs. much-improved Patrick Mahomes in divisional round
10 seconds ago

Bills’ No. 1 defense faces stiffer test vs. much-improved Patrick Mahomes in divisional round