For many years, Macy’s (NYSE:M) store-brand credit card has been a huge contributor to the department store giant’s financial performance. In fiscal 2019, net credit card revenue totaled $771 million, accounting for more than half of the company’s adjusted operating income. Last year, Macy’s recorded $751 million of net credit card revenue, despite the pandemic’s impact.

However, Citigroup — the company’s credit card partner — recently exercised an option to terminate its contract with the retailer ahead of schedule. That creates a ton of uncertainty for shareholders that won’t be resolved until the two sides negotiate a new contract or Macy’s chooses a new credit card partner.

Why the credit card program is so important

A Citibank affiliate (Department Stores National Bank) issues credit cards on behalf of Macy’s and its upscale Bloomingdale’s brand. These include a simple store credit card that can only be used at Macy’s and a co-branded American Express card that can be used with any merchant that accepts AmEx. Macy’s and Bloomingdale’s-branded cards account for 40% to 50% of spending at the retailer in a typical year.

Store credit cards tend to carry high interest rates, making them very lucrative for banks. Under its agreement with Citibank, Macy’s receives payments based on amounts charged to its private label and co-branded cards, as well as bounties for signing up new card accounts and profit-sharing payments based on the performance of its card portfolio.

These high-margin revenue streams have always contributed significantly to earnings at Macy’s. However, they have become even more important in recent years, as favorable portfolio performance has driven growth in net credit card revenue, even as profit margins in the core retail business have fallen significantly.

A change is coming

The long-term agreement with Citibank gave the bank an early termination option if sales in any 12-month period at Macy’s fell more than 34% compared to the period from July 2006 to June 2007. Because of the impact of the COVID-19 pandemic, sales for the 12-month period ending in February 2021 fell far enough to trigger this option.

In its most recent quarterly report, the company revealed that Citibank exercised its early termination option on June 4. Macy’s has six months from that date to decide to purchase the credit card receivables itself or to choose a new credit card partner to purchase them on its behalf. It then has six additional months to complete the transaction.

Of course, Macy’s and Citibank could also choose to negotiate a new agreement. Macy’s CFO Adrian Mitchell recently stated that the two companies are still having discussions about a new contract.

Not a disaster, but something to watch

In his comments at recent investor conferences, Mitchell has noted that the company’s credit card portfolio is very healthy and should be attractive to many financial institutions. Additionally, department stores’ sales have come roaring back year to date. 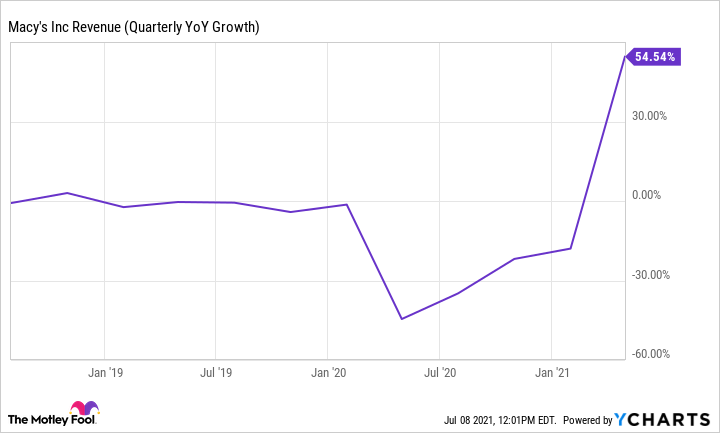 The rapidly improving sales and earnings performance should give potential Macy’s partners more confidence in the sustainability of its business — and thus, its credit card program. Still, Citibank wouldn’t have exercised its early termination option if it were unwilling to lose the Macy’s credit card business. That makes it unlikely that another credit card issuer will offer Macy’s better terms than what it had under the deal that Citibank just terminated.

On the bright side, Macy’s remains a big retailer and will likely generate close to $10 billion of sales from its credit cards this year. That should make its credit card portfolio attractive enough that the terms of its next credit card deal won’t be too much worse than the previous one. But until Macy’s signs a new agreement and explains the impact on its future credit card revenue, the uncertainty about this important revenue stream will continue to represent a big risk for shareholders.