Biotech stocks have been some of the most reliable capital-appreciation vehicles in the entire market for the past two decades. The genomic revolution has spurred the development of treatments for scores of diseases that were once thought to be untreatable through medication.

Risk-tolerant investors, in turn, have been richly rewarded by getting in on the ground floor of this innovation bonanza in healthcare. As proof, biotech equities such as CRISPR Therapeutics, Moderna, Novavax, Ocugen, and Vertex Pharmaceuticals — just to name a few — have all made their early shareholders market-crushing gains.

Not all biotech stocks are cut from the same cloth, however. These high-profile success stories are countered by literally dozens upon dozens of devastating failures.

Developing novel drugs, therapies, and vaccines — despite the recent advances in genetic sequencing — remains an ultra-risky endeavor. Success rates for some forms of cancer, dementia, and viral infections can be as low as 1% to 10%. Meanwhile, the companies taking on this Herculean task generally require billions of dollars to keep their doors open while the lengthy clinical-trials process plays out. Biotech investing, in short, is not for the faint of heart.

Adaptimmune has seen its shares shed over a quarter of their value in the past 12 months. The interesting part to this story is that the company has ticked off multiple value-creating events during this time period.

First, Adaptimmune’s lead product candidate afamitresgene autoleucel, or afami-cel for short, posted an overall response rate of 41.4% (12/29 evaluable patients) for synovial sarcoma (a type of soft tissue cancer) in its midstage trial last June. The company thus intends to file for its approval as soon as next year. This single therapy could easily haul in several hundred million in sales per year for Adaptimmune.

Second, Adaptimmune recently released impressive early-stage results from its Surpass trial of genetically engineered T-cells in patients with a variety of solid tumors. While this early stage reported a response rate of 36% and a disease-control rate of 86% in a basket of solid tumors, Adaptimmune noted that one patient with ovarian cancer had a complete response. What’s important to understand is that these types of responses are essentially unheard of in the solid-tumor setting.

Last but certainly not least, Adaptimmune’s top-notch modified T-cell platform led to a sizable partnership agreement with biotech heavyweight Roche. This deal should keep the company from having to constantly dilute shareholders for capital in the coming years and could be the opening salvo to an eventual buyout (assuming the data warrants a merger agreement). The big picture is that Adaptimmune’s shares are arguably a steal at these levels — the company’s market cap is approximately $899 million right now — especially with Roche recently entering the picture.

Corvus’ shares recently quadrupled in value in less than a week, thanks to a cancer combination trial by AstraZeneca featuring a drug targeting the CD73 immune pathway. Corvus’ stock shot up because the company is currently is having trials for its own anti-CD73 compound known as mupadolimab.

Mupadolimab is presently in early-stage trials for head and neck cancer, along with other virally induced cancers. The big deal is that multiple blue chip pharma companies are exploring this novel immune pathway — especially as a way to boost the effectiveness of their top-selling checkpoint inhibitors. 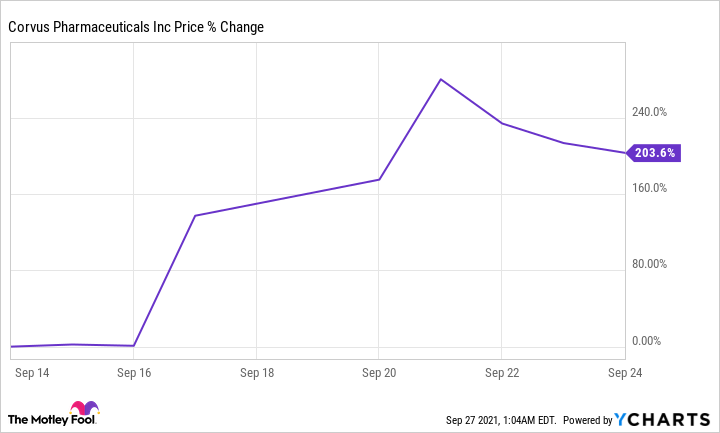 Will Corvus land a partnership because of mupadolimab? There’s no way to tell, unfortunately.

Corvus isn’t the only company pursuing the CD73 immune pathway. However, a late-comer to the party could indeed choose to add mupadolimab to its pipeline through either a licensing deal or a buyout in the wake of Astra’s breakout results. Corvus, after all, could probably be scooped up for less $800 million, which isn’t exactly a large amount of money for most blue chip pharmas.

To put this speculative deal into perspective, Corvus’ current market cap is approximately $288 million. So it wouldn’t exactly take a huge investment to bank a tidy sum if this hidden gem does indeed land a deep-pocketed partner. Verastem, a small-cap cancer company, could be on the verge of a monumental comeback. The company’s stock is down by an eye-popping 57% over the past 36 months because its leukemia and lymphoma drug Copiktra never took off as a commercial entity.

Since then, Verastem has monetized this asset by selling its commercial rights to Secura Bio in late 2020. Following that move, the biotech in-licensed the RAF/MEK inhibitor VS-6766 from Chugai Pharmaceutical for a mere $3 million. Its shares, in turn, have jumped by a noteworthy 48% so far this year.

The main reason for Verastem’s sharp u-turn is that VS-6766 has since gone on to produce compelling efficacy results in recurrent low-grade serous ovarian cancer, potentially paving the way for an accelerated regulatory filing in late 2022 or early 2023. What’s more, Verastem recently teamed up with Amgen to evaluate VS-6766 in combination with the biotech’s newly approved KRAS inhibitor Lumakras.

This clinical-collaboration agreement didn’t include any financial incentives. But there’s a growing body of literature suggesting that MEK inhibition may be a powerful way to enhance drugs aimed at the KRAS mutation. Most interestingly, there’s a well-supported hypothesis in the peer-reviewed literature that the combination of these two types of meds may be a potent treatment for pancreatic cancer — a type of malignancy that has proven almost impossible to drug effectively.

All told, Verastem still has a long road ahead to validate its pivot to VS-6766 as its main value driver. Patience will be required with this small-cap biotech stock. That said, the payoff could be enormous. This name hasn’t gotten much attention from retail investors yet, which is arguably one of the main reasons its market cap is well below the underlying value proposition of its lead clinical asset.

Djokovic visa ‘distraction’ to be subject of review
1 hour ago