Even as the major market indexes are topping fresh highs, there are plenty of great growth stocks out there that have been punished as some investors have turned their focus to “recovery” stocks. Investors with the right mindset and a sufficient investing time horizon of three to five years will be able to benefit from the short-term thinking that is currently plaguing these otherwise stellar companies.

Some of the stocks that have been hardest hit in recent months offer a killer combination of best-in-class offering, a large and growing addressable market, and a massive secular tailwind that could provide life-changing returns — and they are currently on sale.

Let’s look at three stocks that meet those lofty criteria and could help set you up for life.

One fact that became undeniable over the course of the past year is that not only is digital retail here to stay, but the opportunity is much bigger than many imagined. Global e-commerce sales are expected to climb to $4.9 trillion in 2021. Even more impressive is the fact that nearly 20% of every retail dollar is expected to come from online sales. That represents a large and growing opportunity for Shopify (NYSE:SHOP).

The company is the leading provider of e-commerce solutions to business. Yet, what began as a way to level the playing field for small and medium-sized companies quickly grew to include services for large enterprise as well.

Shopify provides merchants with cloud-based solutions that include everything they need to set up and maintain a digital retail operation. It offers tools to simplify operations for businesses that sell across multiple online sales channels, including web, mobile, social media, and online marketplaces — as well as brick-and-mortar stores. Shopify handles many of the day-to-day details that are key to success, including product management, inventory, payments, and shipping, while offering value-added services like working capital loans.

Given the stock’s 23% decline so far this year, you’d be tempted to think its business is trailing off, but nothing could be further from the truth. Shopify’s first-quarter revenue grew 110% year over year, while subscription revenue grew 71%. This signals a large and growing foundation of recurring revenue upon which to build its future. Additionally, excluding a one-time gain, Shopify still grew earnings per share by more than 10-fold compared to the prior-year quarter.

With more than 1 million merchants under its wing, Shopify is the clear industry leader, but the opportunity that remains is vast. The company generated revenue of $2.93 billion last year, which pales in comparison to its total addressable market of $78 billion — and that’s just small and medium-sized businesses. One of the companies that’s been hardest hit as technology stocks have fallen out of favor has been The Trade Desk (NASDAQ:TTD). Shares of the programmatic advertising specialist have slumped, even as its growth and future prospects have improved. This gives savvy investors the opportunity to own this quality company at a 44% discount.

Programmatic advertising is The Trade Desk’s bread and butter. The company uses high-speed computers and complex algorithms to match ads with the right viewers. When advertisers were looking for more bang for their buck, they turned to The Trade Desk in droves last year. The company’s cutting-edge platform can evaluate 12 million ad impressions and quadrillions of permutations each second, ensuring its ads target the right audience.

The Trade Desk started off 2021 with a bang. First-quarter revenue grew 37% year over year, accelerating from 33% growth last year, and soaring past analysts’ consensus estimates and management’s forecast in the process. This growth rate illustrates that the company is stealing market share from its rivals. At the same time, The Trade Desk’s adjusted earnings per share jumped 57%, more than double what analysts were expecting.

That’s not all. The Trade Desk built Unified ID 2.0, the industry-standard replacement for digital advertising cookies that doesn’t rely on personal information for ad tracking, and it’s supported by most of the biggest names in the business.

The move from traditional advertising to digital is ongoing and The Trade Desk is the industry leader in the fastest-growing segment of a market that’s expected to top $1 trillion in the coming decade. Considering the company generated revenue of just $836 million last year, the road ahead is long. NVIDIA: Gaming is just the tip of the iceberg

While some investors associate NVIDIA (NASDAQ:NVDA) with its eponymous graphics processing units (GPUs) — which are the top choice of serious gamers everywhere — that’s just the beginning of the company’s massive opportunity. To be clear, NVIDIA is the undisputed leader in the discrete desktop GPU market, with an unrivaled 82% share in the fourth quarter of 2020.

That alone would be sufficient reason to own the stock, but NVIDIA also corners the market when it comes to cloud computing, data centers, and artificial intelligence (AI). Its unmatched parallel processing capability — which enables a multitude of complex mathematical calculations simultaneously and is instrumental in rendering lifelike images in games — can also handle the unique demands of AI and cloud computing.

Don’t take my word for it. NVIDIA GPUs are a staple for each of the world’s top cloud providers, including Amazon‘s AWS, Microsoft‘s Azure Cloud, Alphabet‘s Google Cloud, International Business Machines‘ IBM Cloud, and Alibaba Cloud. It also powers a host of smaller cloud operations.

These factors combined to fuel record fourth-quarter and full year growth for NVIDIA in 2020. Revenue grew 61% year over year in Q4, driven by gaming revenue that climbed 67% and data center revenue that surged 97% — with both segments delivering record-setting performances. That led to record profits, as net income jumped 53%.

NVIDIA generated revenue of $16.68 billion last year, a drop in the ocean compared to its market opportunity, which management estimates will reach $250 billion over the next couple of years.

Savvy investors will also like that they can buy this impressive growth at a discount, as NVIDIA stock is currently selling for 15% off its recent highs. 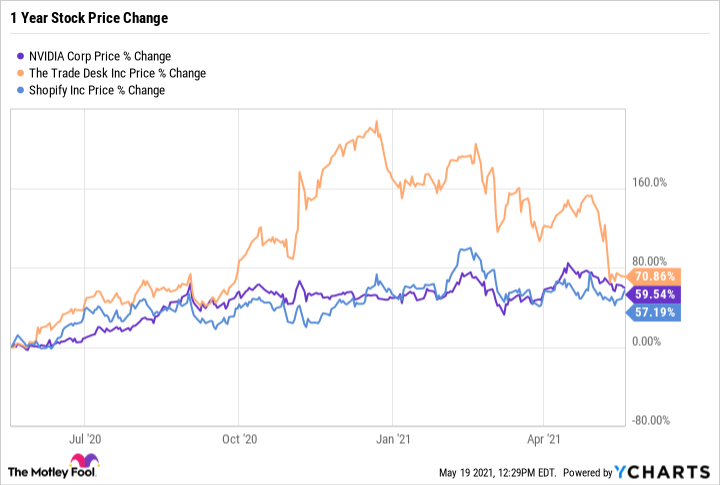 You get what you pay for

It’s important to note that commensurate with the high-risk, high-reward nature of these stocks, they also come with a high sticker price — even after their recent stock price declines. Shopify, The Trade Desk, and NVIDIA are selling at 32 times, 21 times, and 15 times forward sales, respectively, when a reasonable price-to-sales ratio is generally between one and two. Unlike some high-flyers, however, each of these companies is profitable.

Investors have thus far been willing to pay up for the enormous future potential of each of these high-flyers, the recent rotation out of tech stocks notwithstanding. When considered in the light of their impressive top-line growth and potential for explosive profits, they simply don’t seem that expensive.