Innovative Industrial Properties (NYSE:IIPR) is one of the hottest and most stable competitors in the cannabis industry, but you won’t find it selling joints. In fact, when it comes to joints, it’s a buyer. When a medical marijuana company needs cash to grow but it only has real estate in hand, it can sell the joint (that is, the place) where it cultivates cannabis to IIP, which then leases it back as the landlord.

As shown by its ongoing efforts to build an empire of medicinal cannabis production facilities, IIP isn’t a typical real estate investment trust (REIT). For now, it’s the only one of its kind. And while the stock could massively benefit from the big changes that would come with cannabis legalization in the U.S., smart investors know that there’s a handful of powerful but more subtle factors in its favor which are worth knowing about.

The beauty of Innovative Industrial’s business model is that there’s a very low chance of any of its properties being vacant. As mentioned previously, the company performs sale-leaseback transactions in which it buys actively operating cannabis cultivation facilities, then leases them back to the former owners immediately thereafter. The unit’s occupants stay right where they are, and their business supports their ongoing rent payments to the new property owner, IIP.

Even if the tenants were in danger of being insolvent before the leaseback, the infusion of cash from the sale of their property is probably enough to grease the wheels for a while — assuming that a nearly insolvent company could pass IIP’s stringent vetting and demands for collateral, of course.

In total, the combination of leased-upon-acquisition properties and careful evaluation of potential tenants makes for an ironclad defense against vacancies. As of July 6, IIP’s holdings were 100% rented out, and it’s entirely reasonable for investors to assume that this will continue to be the case for the foreseeable future, even as the company acquires new space.

2. Income from existing leases rises annually, and property value could, too

One of the best features of this stock is that it doesn’t rely on the growth of its underlying market (cannabis) to keep expanding its revenue base.

Even if IIP doesn’t perform any sale-leasebacks in a given year, it’ll still make more rent money than the previous year. The reason for this is quite simple: It’s mandatory. Per the terms of most of its leasebacks, the company insists on annual rent raises of up to 4.5%.

Obviously, that means its rental revenue compounds over time. And with most of its leases ranging from 10 to 20 years in duration, there’s plenty of time for revenue from an individual lease to grow and grow and grow. Right now, across all its properties, the weighted average remaining lease term is 16.7 years.

Importantly, IIP’s real estate could also increase in value in the long term. When its tenants want to make certain additions or modifications to their units, the company reimburses them for some of the costs. The value of the units then goes up, because other cannabis companies might want to make use of the new facilities. That’s favorable for shareholders, as it lets IIP continue to reinvest some of its excess cash into its collection and leaves it more prepared to win higher rates from future tenants. 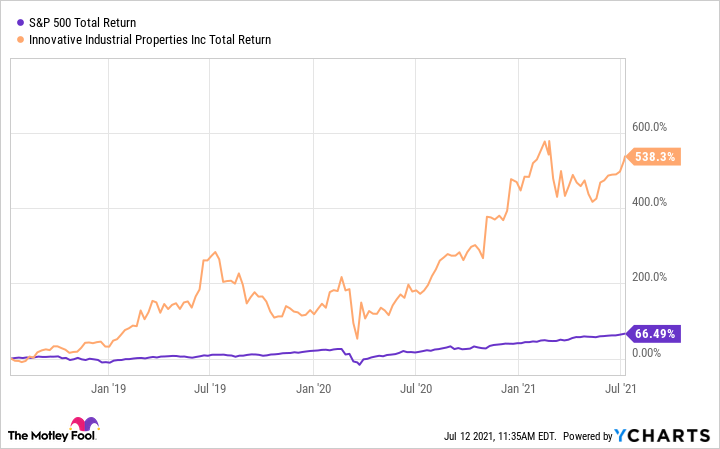 3. The dividend will probably continue to rise

While its current dividend yield of about 2.81% isn’t especially attractive to new investors, the appeal of a sharply rising payout over time is hard to deny. Every time the dividend rises, holders see the cost basis drop for their shares.

Smart investors also recognize that IIP’s dividend is extremely secure. As long as it has tenants, there’s not much that can threaten its bottom line.

4. Legalization could be a mixed blessing

Part of IIP’s appeal to its tenants is that they may struggle to get financing through traditional avenues like banks. As cannabis is still illegal at the federal level in the U.S., many payment processors and other financial institutions refuse to work with medicinal marijuana companies. So, IIP fills the gap by giving them access to capital.

But it’s unclear whether tenants will still need its services if marijuana is legalized nationwide. Once restrictions on banking ease, it might be more lucrative for businesses to simply take out a loan and retain control of their real estate. That’d make it significantly harder for IIP to acquire new tenants and new properties, though it could still rely on income from its existing leases.

For the moment, management seems to see the growth of the company’s total addressable market as a positive thing. And the company could potentially work with cultivators that are in need of cash in addition to the capital raised from traditional banking institutions post-legalization. In short, smart investors are aware that legalization may be a wild card.