President Biden is proposing as much as $2 billion in infrastructure spending over the next decade, which would be a massive investment in modernizing roads, bridges, and the electrical grid. For investors, a huge investment like this can not only grow the market for renewable energy stocks, it can fundamentally change our energy future.

We asked three of our Foolish contributors for their top picks if an infrastructure bill passes, and some of the biggest names in renewable energy popped to the top of the list. Here’s why Atlantica Sustainable Infrastructure (NASDAQ:AY), Equinor (NYSE:EQNR), and Bloom Energy (NYSE:BE) could be big winners for renewable energy investors over the next decade.

Howard Smith (Atlantica Sustainable Infrastructure): President Biden has laid out his infrastructure package proposal, and it includes $100 billion to improve the nation’s electric grid and $27 billion as a “clean energy and sustainability accelerator.” While any final version of an infrastructure bill may not match exactly what Biden proposes, it seems likely that expanding the use of clean energy will be a focus.

Atlantica Sustainable Infrastructure’s business model has had that same focus. The company calls itself “a sustainable infrastructure company with a majority of our business in renewable energy assets.” About 70% of Atlantica’s revenue came from renewable energy assets in the first quarter ended March 31, 2021. The balance was split among efficient natural gas, transmission and transportation, as well as water infrastructure. Biden’s plan includes funds to grow those same assets, including $111 billion designated for water infrastructure improvements.

Atlantica’s business is doing well even without a boost from federal infrastructure spending. In the first quarter of 2021, the company closed the acquisition of a contracted renewable energy plant in California and a Chilean solar energy plant. It also announced an agreement for 49% interest in a 600 megawatt (MW) portfolio of wind assets in Illinois, Texas, Oregon, and Minnesota. That’s a relatively large addition to the 1,600 MW of renewable assets in which the company currently has full or partial ownership in operation. It also believes there is room to create added opportunity from the portfolio. On the first-quarter 2021 conference call, Atlantica CEO Santiago Seage told investors the added wind capacity will contribute to “further increasing and diversifying our presence in renewable energy in North America.”

Importantly for investors wanting income, in the first quarter, cash available for distribution grew 7.6% over the prior year period with revenue growing almost 12%. That helps support the dividend the company has been steadily increasing over the last three years. 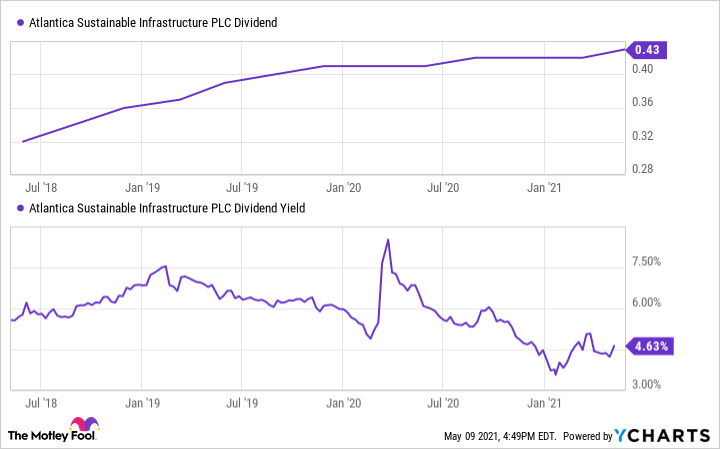 Atlantica Sustainable doesn’t just operate in North America. It also grew its revenue in South America, Europe, the Middle East, and Africa in the first quarter. But a new infrastructure bill in the U.S. could still be very beneficial to enhance ongoing growth for the company.

Daniel Foelber (Equinor): President Biden’s new infrastructure bill is chock-full of initiatives that benefit a variety of sectors. But few industries stand out more than renewables.

From the next generation energy grid, to cleaner transportation fuels, to demand for more electric vehicle infrastructure, there’s a lot to take in from the historic bill.

Norwegian oil and gas titan Equinor may not be the first beneficiary that comes to mind. But the company is making big moves away from oil and gas and into renewable energy. It’s a natural fit for Equinor — which has spent 50 years drilling for oil in the North Sea. With much of the low hanging fruit depleted, it’s now drifting toward pairing its offshore oil expertise with offshore wind.

Equinor’s high free cash flow and low operating costs free up spending for wind investments. Its offshore wind portfolio leads the oil majors and is one of the largest of any operator in the world. Don’t be surprised if Equinor capitalizes on higher oil and gas prices in the short term. But over the long term, management has voiced its dedication toward transitioning to offshore wind.

On the horizon are several major projects, two of which are off the U.S. east coast. Known for being shallower and better geologically suited for offshore wind, the east coast is likely to comprise the majority of offshore wind development in the coming five to 10 years, with the U.S. west coast following suit, namely through floating offshore wind developments. Equinor’s Beacon Wind and Empire Wind are two of the largest offshore projects in the world. Both are located off the coast of New York.

We are in the early innings of offshore wind, so profitability remains unclear. Equinor expects it will earn between 8% and 12% in unlevered nominal returns (returns that ignore taxes, financial leverage, inflation, etc.). Profitably should improve with scale and technological advancements, making Equinor a great renewable energy stock for the coming decades.

Travis Hoium (Bloom Energy): As Howard and Daniel have highlighted, billions of dollars would flow into clean energy as part of President Biden’s infrastructure plan. But the real opportunity I’m seeing is in what his plan calls “modernizing power generation and delivering clean electricity.” To do that he calls out not only clean energy generation, but also storage. And that’s where a company like Bloom Energy could be a huge beneficiary.

Bloom Energy makes fuel cells for utility and commercial-scale applications. So far in its history that has meant using natural gas or another fuel as the input to the fuel cell, which then produces electricity. But long-term, the vision was always to use hydrogen as fuel and produce clean electricity.

To store energy, Bloom’s fuel cells can actually be run backward as an electrolyzer. This will turn electricity from wind and solar power plants that are combined with water into hydrogen fuel that can be stored and used later.

Building a truly clean electric grid will require more wind and solar, but it’ll also require huge amounts of energy storage and on-demand electricity production, both of which Bloom Energy can provide.

Financially, Bloom is growing revenue despite lowering the cost it charges per MW for fuel cells and is increasing margin at the same time. Those are great trends for any renewable energy stock, and given a multi-trillion dollar potential market and potential tailwinds from the Biden infrastructure plan, Bloom Energy is my pick today.

No infrastructure package has been passed yet, but if one is, it’s safe to say that the renewable energy industry will be one of the biggest beneficiaries. That’s why our picks are all within this growing industry and we think Atlantica, Equinor, and Bloom Energy all have a lot of upside today.