In 1996, Federal Reserve Chairman Alan Greenspan gave a speech warning of irrational exuberance in the stock market. Over the next three and a half years, the Nasdaq would climb almost 300%. Trying to time the stock market might be the most difficult — and least successful — way to invest.

One approach to investing that may sound too simple to work is to just buy the companies performing the best and add money to them over time. That’s especially true if the company is disrupting legacy players in a massive market. Despite a stock price that keeps rising, Upstart Holdings (NASDAQ:UPST) is giving investors this rare opportunity. And waiting for the right time to buy shares could undermine what is already working.

Upstart has developed a model using machine learning to evaluate risk. Its banking partners use that model to make better lending decisions, mostly for personal loans. So far, it’s benefiting everyone. In a study by the Consumer Financial Protection Bureau, the company’s model led to 27% more borrowers being approved with a 16% lower average interest rate. It’s also facilitating a better customer experience by automating decisions. The company is now setting its sights on larger markets.

In the first quarter, it acquired Prodigy Software — a company that helps auto dealerships transition their business online — and has listed auto lending, credit cards, and home mortgages as potential applications of its technology. Those are much larger markets, and it will take years to get penetration.

It’s a perfect example of why life-changing investments typically take years, if not decades. For the most part, the quicker you expect a great investment to pay off, the more luck you will need.

So far, management is proving its mettle in the personal loan business and giving every indication that it can repeat the performance in auto lending. It’s growing so fast, it seems like management can’t keep up. The company has reported three quarters so far — beginning with its full-year 2020 release in March — and has raised fiscal year 2021 revenue guidance each time. It has lifted the number 50% in five months.

Wall Street is also having a hard time catching up. The stock has now climbed 480% since the initial public offering. If you think the gains are behind it, consider Upstart still has a market capitalization of only $13.2 billion. 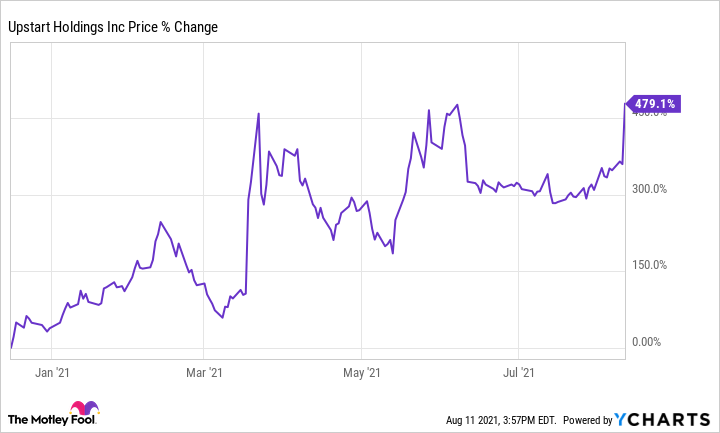 The analysts will have some more upgrades to make after the company’s second-quarter earnings this week. Upstart put up $194 million in revenue — more than 1,000% year-over-year growth — and guided full-year revenue to $750 million. According to Yahoo! Finance, the highest current analyst estimate listed for 2021 revenue is $605 million.

When CEO Dave Girouard left Alphabet‘s Google to co-found Upstart in 2012 (he was also a product manager at Apple in the Steve Jobs days), he couldn’t have known it would take nearly a decade to get his venture to the public market. When the company was first started, it was a crowdfunding idea where individuals would swap a portion of future earnings in exchange for money upfront. It was popular but didn’t scale. With six months of cash left, he and his co-founders pivoted to a direct loan product. That idea took off.

Venture capitalists have to fund a lot of ideas and hope a few of them are successful. Often, that means going public. As retail investors, we need to be a bit more discerning about how we define success. Growing the business — and ultimately the stock price — is the best way to keep score. Having access to financial statements and quarterly updates means we have much more information about the viability of the business than those early-stage investors. That actually translates into much less risk. That’s why there is no reason to overcomplicate it.

Upstart is a rapidly growing, profitable business that is scaling into its second lending market. Its overall opportunity is about 6,000 times its current revenue. And the company — one that uses artificial intelligence (AI) to differentiate itself — is led by someone who spent eight years as an executive at the company with some of the world’s most accomplished AI practitioners. If your investment horizon is at least three to five years, don’t outsmart yourself. And don’t wait for a market crash no one can predict.

Solskjaer running out of time after Liverpool humiliation
10 mins ago