Neurodegenerative disorders extract a terrible human toll. In particular, dementia affects more than 44 million people globally with Azheimer’s being the most common cause, accounting for 60% to 80% of all cases of dementia. Moreover, dementia is the fifth most common cause of death worldwide. Thankfully, there are a handful of companies working on treatments for Alzheimer’s.

With the recent commercialization of Biogen‘s drug Aduhelm, investors everywhere can take heart that the disease might finally be treatable. So, the floodgates for Alzheimer’s drug development are open, and there’s money to be made by investing in the most promising candidates. While there’s no guarantee that any of the companies I discuss below will actually succeed in making an effective Alzheimer’s therapy of their own, they’ll all have an edge over Biogen’s Aduhelm if they do.

Annovis Bio (NYSEMKT:ANVS) is a small biotech that’s working on ANVS401, a drug which it hopes will be able to treat Parkinson’s disease and Alzheimer’s disease in people with Down syndrome. ANVS401 is currently in phase 2a of clinical trials, and on June 1 the company reported that the drug appeared to help patients with Alzheimer’s score significantly higher on a standardized test that measures the speed and accuracy of their cognition. Impressively, the drug also helped patients with Parkinson’s as well. That’s a bombshell of a finding, to say the least, and Annovis’ stock shot toward the moon as a result.

The secret to ANVS401’s efficacy is its triple-pronged approach. Rather than attacking only one of the proteins associated with Alzheimer’s, as Biogen’s Aduhelm does, the drug targets three: beta amyloid, tau, and alpha synuclein. So, there’s a chance that it could blow Aduhelm out of the water if it ends up getting approved.

Investors will need to act quickly if they want to purchase the stock before what could be another major catalyst. Annovis will report the full results of the ANVS401 trial in August. Before that, it’ll present a lengthy update at the Alzheimer’s Association International Conference, which starts on July 26. If the previously disclosed results hold up, it’s hard to see the stock going anywhere but skyward.

The pharma giant Eli Lilly (NYSE:LLY) has a slew of different Alzheimer’s therapies in development, including a pair of candidates in phase 3 of clinical testing: Donanemab and Solanezumab. Both drugs target the beta-amyloid proteins associated with Alzheimer’s, but Solanezumab aims to remove circulating beta-amyloid whereas Donanemab is focused on dissolving immobile beta-amyloid plaques.

Eli Lilly’s advantage is that it has developed several different diagnostic tools that it can use to identify characteristics of Alzheimer’s patients which these drugs are the most likely to help. After using these tools to screen for patients in the second phase of its clinical trial of Donanemab, it reported positive results.

In short, patients treated with Donanemab experienced a slower progression of their disease, as measured by a handful of different cognitive-functioning tests, than patients treated with placebo. But cognitive functioning still declined over time, so the therapy isn’t a panacea. Still, if these findings hold up, Eli Lilly will probably be the next Alzheimer’s drug developer to make it to the market after Biogen, and based on the data as it stands right now, its candidate is superior. But, as Eli Lilly is a massive pharma stock with a plethora of other drugs on the market, it remains to be seen whether the potential new revenue could make a major impact on its top line.

The company expects to report efficacy data sometime in the first half of 2023, so keep an eye out. 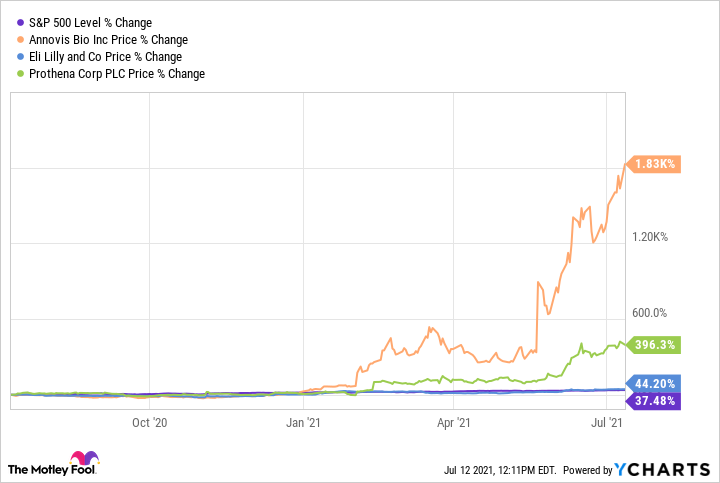 Prothena‘s (NASDAQ:PRTA) selection of Alzheimer’s projects is significantly earlier-stage than Eli Lilly’s or Annovis Bio’s. It has two programs in the tail end of preclinical testing, and two others in the discovery phase. One of the candidates being investigated in the discovery phase is a vaccine aimed at recruiting the immune system to fight against two different proteins associated with Alzheimer’s, which could be extremely lucrative if it can be used preventatively.

The company’s crown jewel, PRX005, which Prothena is developing in conjunction with Bristol-Myers Squibb, just started its phase 1 clinical trials on June 24. The drug targets the tau protein associated with Alzheimer’s, and studies in model animals have been quite positive. Bristol Myers Squibb will pay Prothena $80 million in exchange for the license to PRX005, should it be commercialized, with the option to pay more to advance development after each phase of trials.

Given how early-stage Prothena’s projects are, the biggest thing for investors to watch for is safety reporting. Serious side effects could nip its promising therapies in the bud, and the risk of investing right now is very high. Nonetheless, if the company can show that its candidates are safe, that will be a major boon to shareholders. And it’ll pave the way for further investigations that would have a shot at demonstrating the drug’s efficacy, which is where the biggest returns lie.

Slimmer Will Hernandez has new Giants challenge in contract year

The Jets-Zach Wilson standoff is really, really dumb
37 mins ago

5 things the Packers can do to keep Aaron Rodgers past 2021, from new contracts to a Super Bowl run
49 mins ago

5 things the Packers can do to keep Aaron Rodgers past 2021, from new contracts to a Super Bowl run