AstraZeneca (NASDAQ:AZN) has been an underwhelming stock to own over the past year. Its shares are up less than 2% while the S&P 500 has soared more than 32%.

Part of the lackluster showing is likely due to its COVID-19 vaccine, which has faced some bad press this year, based both on questions about its overall effectiveness and on its potentially causing blood clots. While it’s not currently being sold in the U.S., AstraZeneca’s vaccine is approved for use in other parts of the world, including the European Union, the U.K., and Canada, and it is possible that the U.S. Food and Drug Administration could approve it later this year.

But AstraZeneca is more than just a COVID stock, and it has plenty of growth opportunities ahead. Could this overlooked stock even be a bargain buy, given how ridiculously overpriced some companies are right now?

The business is coming off a strong earnings report

On July 29, AstraZeneca released its earnings for the first half of 2021. There were many positives in the report, including 23% revenue growth and sales of $15.5 billion; the latter included a $1.2 billion boost from its COVID-19 vaccine. AstraZeneca also generated 15% revenue growth in its biopharmaceuticals division and 19% growth from oncology-related revenue (its largest segment). Excluding revenue from the vaccine, the company’s overall sales growth was still positive, at 14% year over year. AstraZeneca’s earnings per share of $1.61 were also a 37% improvement from the prior-year period, which includes a negative $0.04 impact this past quarter due to the vaccine (the company previously pledged to make the vaccine without seeking a profit on it during the pandemic).

As well as the company did this past period, it could do even better in future quarters and years.

AstraZeneca still plans to apply for authorization of its vaccine in the U.S. before the end of this year. However, since the FDA has already given an Emergency Use Authorization to multiple COVID vaccines and more than 50% of the U.S. population has been vaccinated so far, even that potential green light might not bring in too much revenue.

Another growth opportunity will come from its $39 billion acquisition of Alexion Pharmaceuticals, a biopharmaceutical company, which it completed on July 21. Alexion has many orphan drugs in its portfolio that treat rare conditions. One of the most attractive is Ultomiris, which generated $1.1 billion in revenue last year — more than tripling the $339 million it brought in a year earlier. Ultomiris treats patients with paroxysmal nocturnal hemoglobinuria, a rare blood disease that can be life-threatening. AstraZeneca’s management projects that the Alexion acquisition will help to boost this fiscal year’s revenue by at least 20%.

Over the long term, there’s even more potential for AstraZeneca, which had a total of 160 projects in its pipeline — including 13 that are in late stages — even before the acquisition. Alexion’s pipeline has contributed another 30 therapies.

How AstraZeneca’s stock compares with other vaccine makers

Compared to Johnson & Johnson and Pfizer, AstraZeneca’s stock looks fairly valued today, trading at a forward price-to-earnings multiple of about 13: 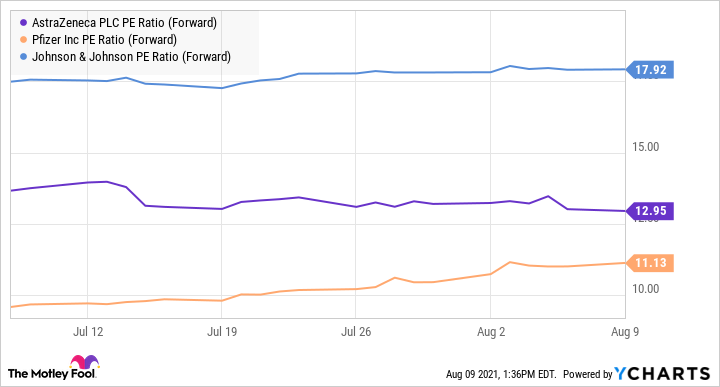 While it may not be a dirt cheap buy, AstraZeneca doesn’t look expensive, either. And it has the potential to be a bargain, depending on how well its pipeline pans out. Its sales and profits could grow significantly over the years, especially now that it’s expanded its portfolio with the acquisition of Alexion.

Is AstraZeneca stock a buy?

In August, investment bank SVB Leerink upgraded its price target for AstraZeneca’s stock from $63 to $69. That price represents an upside of more than 23% from where it trades today.

I wouldn’t suggest this as a healthcare stock to buy if you’re simply looking for a company that will do well due to its COVID-19 vaccine. But if you’re willing to hang on for the long haul, AstraZeneca could be a great buy — one that delivers returns far higher than 23%. With so many projects in its pipeline, there’s likely to be some strong growth in its future. Another reason to consider the stock for the long haul would be for its dividend yield, currently 2.5% — well above the S&P 500 average of 1.3%.

Although AstraZeneca hasn’t been a great investment over the past 12 months, there are plenty of reasons to remain bullish on the stock in the years ahead.

QB Prescott (calf) must clear ‘threshold’ to play
3 mins ago