Robotic surgery sounds like a futuristic fantasy, but thanks to Intuitive Surgical (NASDAQ:ISRG), we have access to it right now. As the maker of the da Vinci robotic surgery units, Intuitive is a high-tech pioneer in healthcare, and it’s a wildly profitable company as a result.

But as smart investors know, it doesn’t always pay to bet on an innovator. Often the copycats and followers end up being the best for investors in the long run as it tends to take a lot of spending on research and development to maintain a leading edge. Nonetheless, I think Intuitive Surgical has a massive amount of upside to come — and at the moment, there’s not much reason to worry about competitors eating its lunch.

The equipment is well-established

The most important argument in favor of Intuitive’s stock is that its business model is, in a word, exquisite.

First, it sells its da Vinci robotic surgical systems to hospitals, where it then trains surgeons to use them and helps with the installation. Hospitals purchase maintenance services to protect their investment, and they also are obliged to buy sets of disposable surgical tools as well as accessories for their robot. As Intuitive develops new types of tools and accessories, it sells them to existing customers while providing additional training as necessary.

Importantly, because of how much time and money hospitals need to invest in getting their staff up to speed on using the da Vinci systems, there’s practically a built-in customer retention program. Even if a competitor comes along offering a slightly better or cheaper robot, switching products is so difficult that customers are more likely to stick with the da Vinci, which their surgeons already understand how to operate.

Investors will also appreciate Intuitive’s financial performance. Over the past five years, free cash flow (FCF) has grown by nearly 40%. That means the company has become more efficient at squeezing additional returns out of every dollar it invests. It also means that management has a larger and larger pool of resources it can use to invest in new technologies, acquire promising businesses, perform share buybacks, or expand the existing business.

Revenue and earnings are rising steadily too — helped by the growing use of its robotic surgical systems with every passing year. In short, despite its size, Intuitive is still continuing to gain momentum. 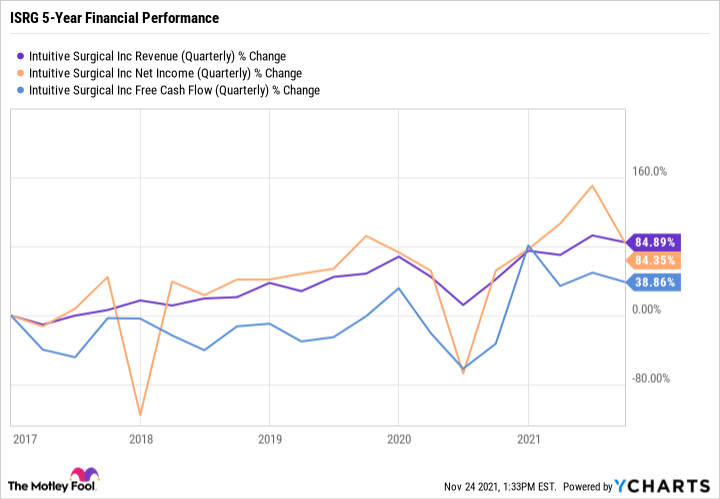 Powerful competitors are starting to move

As favorable as its trajectory is, Intuitive Surgical isn’t a risk-free stock. It isn’t the only company in the robotic surgery space anymore, and start-ups aren’t the only ones it has to worry about in the rearview mirror. Stryker, Johnson & Johnson, and Medtronic are all trying to establish themselves in this area, and they’re among the largest healthcare companies in the world, so their efforts are likely to be at least somewhat successful.

But so far, these competitors are still lagging far behind Intuitive. Johnson & Johnson’s robot recently hit a snag, possibly delaying its development by as much as two years. In contrast, Stryker’s robot is already on the market, but it specializes in performing joint-replacement surgeries, so it doesn’t directly threaten the da Vinci, which is intended for general surgery, urology, and gynecology. And while Medtronic’s system can do many of the same procedures as the da Vinci, it’s only now starting to be used on patients for the first time in some of its indicated niches.

Is now the right time to buy?

Overall, I don’t see any major barriers to Intuitive continuing to grow over the next few years. Beyond that, competitors will probably start to make deeper inroads, but there will likely be plenty of room for everyone as long as the market for robotic surgery continues to grow.

So now is as good a time as any to buy Intuitive’s stock. As long as the company keeps doing what it has been for the past decade, shareholders should see their investments grow for quite some time into the future.

Curry hits winner, but irked by his poor shooting
14 mins ago

Curry hits winner, but irked by his poor shooting

Westbrook ‘turned page’ with strong game in win
2 hours ago