Whether it’s a new company promising the “next big thing” or a more recognizable business announcing some surprising news, it’s easy for investors — especially inexperienced ones — to be seduced by the allure of popular stocks.

But smart investing demands that investors examine businesses thoroughly and have the wherewithal to not follow the pack simply because a stock is enjoying a bit of celebrity. Therefore, it’s best to tread carefully when it comes to these popular names: Cameco  (NYSE:CCJ), ChargePoint (NYSE:CHPT), Lucid Group (NASDAQ:LCID), Plug Power (NASDAQ:PLUG), and Rocket Lab USA (NASDAQ:RKLB).

Joining the in-crowd, Cameco, a leading uranium mining company, has found some newfound celebrity recently thanks, in part, to the popular subreddit WallStreetBets. The stock is one of the most widely discussed stocks among the Reddit crowd over the past few days, and even those who aren’t on the social media platform may recognize the ticker as one of the market’s high flyers; shares have soared more than 42% over the past month.

Investors whose interests have been piqued by the rapid rise in Cameco’s stock price — among similar increases in the stock prices of other uranium-affiliated stocks — should think twice before picking up shares. The recent increase is more a reaction to the rising spot price of uranium and not a fundamental improvement in Cameco’s business model. Over the past 10 years, Cameco’s stock has significantly underperformed the S&P 500, and investors shouldn’t be too surprised if falling uranium prices lead to a comparable decline in Cameco’s stock price. 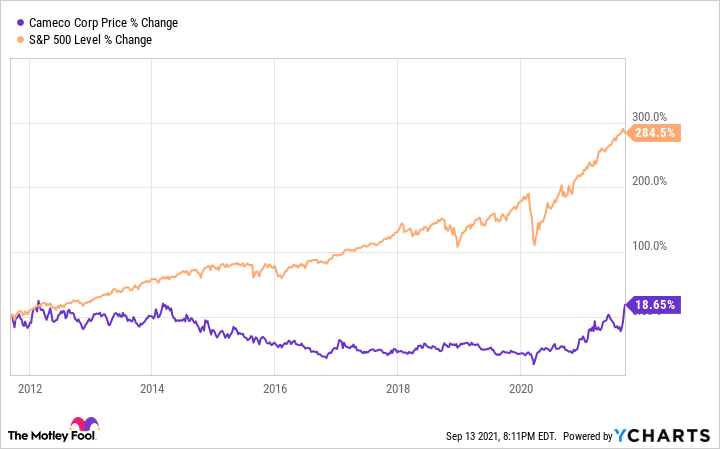 Interest in EVs has raced to the forefront of many investors’ minds over the past year, and it’s hardly restricted to EV-makers. Companies providing EV-charging solutions, like ChargePoint, are also grabbing attention. Over the past 13 years, ChargePoint has developed an EV-charging network that offers drivers in North America and Europe more than 118,000 places to power up their EVs. The company sees significant growth over the next few years, rising from $145 million in 2019 to $2.1 billion in 2026.

It’s easy to be charmed by management’s lofty revenue projections, but investors must recognize that ChargePoint faces powerful competition from companies like Blink Charging, EVgo, and Volta — all of which are determined to develop their own EV-charging infrastructure. Another factor pressuring ChargePoint’s growth is the focus on increasing EV range through improvements in battery technology. With drivers reluctant to get behind the wheels of EVs out of concern for running out of charge, EV-makers are committed to allaying fears by increasing the range of their vehicles. And with drivers capable of driving farther on a single charge, that means fewer stops at ChargePoint’s charging stations.

Trading on the public markets for less than two months, Lucid is a luxury EV-maker that’s vying for pole position regarding popularity among investors. You won’t find any of the company’s vehicles in traffic, but it expects that to change soon, forecasting production and deliveries of the Lucid Air to begin by the end of 2021. Between its imminent luxury EV offering and its development of an energy storage system product, Lucid is garnering attention as a rival to Tesla.

Management expects profits and margins to grow rapidly, forecasting an EBITDA margin of 12.7% on revenue of $22.8 billion in 2026. Investors, however, should be circumspect about taking this lofty projection at face value. Interest in EVs has expanded rapidly from start-ups like Lucid to legacy automakers like Ford and General Motors; GM plans on selling EVs exclusively after 2035. This suggests that the road to growth that Lucid expects to ride in the next few years may not be as easily traveled as management suspects.

Over the past decade, Plug Power has grown a passionate — almost cult-like — following among investors who are bullish on the adoption of hydrogen fuel cell technology. Unlike peers Ballard Power Systems and FuelCell Energy, Plug Power has consistently grown its top line while securing industry-leading customers like Walmart and Amazon. The company gained even more notoriety last year when it revealed interests in becoming a green hydrogen producer as well as expanding into the transportation market — just two of the ways which will help it to achieve its goal of growing sales from $230 million in 2019 to $1.2 billion in 2024, as well as nearing profitability.

Those familiar with the company will tell you, however, that forecasts of improving financials are nothing new. Management has promised a bottom line that’s not colored red before, and it has consistently failed to deliver. Take the company’s 2024 forecast, for instance: adjusted EBITDA of $250 million. When will the company generate net income on a GAAP basis? Until it does (and positive cash flow as well), investors would be well-served to be skeptical about multi-year forecasts and to tread carefully with this hydrogen hopeful.

Lifting off and beginning to trade on the public markets less than a month ago, Rocket Lab — another popular stock among WallStreetBets — provides orbital launch services to civil, defense, and commercial customers. While SpaceX continues to remain privately held, many investors have turned to Rocket Lab — a SpaceX competitor — as a way to gain exposure to the burgeoning space economy. It’s not only investors showing interest, Rocket Lab also has a growing list of customers who are looking to hop aboard. During its first earnings report as a public company on June 30, the company reported that its backlog had grown 136% year-over-year.

Although the bulls are over the moon about the company’s prospects, it’s important to recognize that the company has yet to prove that its space ambitions can be profitable. The company recently reported that its revenue blasted higher to $29.5 million for the six-month period ending June 30, 2021, a 237% gain over that which it reported during the same period in 2020; however, the company’s bottom line was less impressive. Rocket Lab reported a net loss of $32.5 million for the first half of 2021 (compared to $23.5 million during the first half of 2020).

One last reminder about risk

While these stocks have captured investors’ imaginations with the potential of providing massive returns, there’s no guarantee that they’ll be able to deliver on their growth plans; therefore, only investors comfortable with accepting a fair amount of risk should consider adding these names to their portfolios.

‘I was wrong’: Why MLB’s restructuring of the minors turned out mostly better than expected
1 hour ago

Our guide to Bengals-Chiefs, 49ers-Rams: Picks, bold predictions and matchups to know
2 hours ago