AMC Entertainment Group (NYSE:AMC) has many investors curious. The stock inspires many headlines, and AMC is a source of frequent discussion on social media sites and discussion forums.

AMC stock is up nearly 2,000% in 2021, and it has some people asking themselves if they are missing out on the ride of a lifetime. Let’s look closer at the popular meme stock and determine if you should buy AMC stock right now.

First, it’s important to note the company’s rising stock price has little to do with its operating performance. AMC’s business was devastated during the pandemic. While it is slowly bouncing back, the company is still losing money every quarter. There is no telling when or if the company will generate profits on the bottom line.

Rather, its stock price is rising due to a large group of individuals collectively deciding to buy and hold the stock. Like many financial assets, when the demand goes up, the price moves in the same direction. 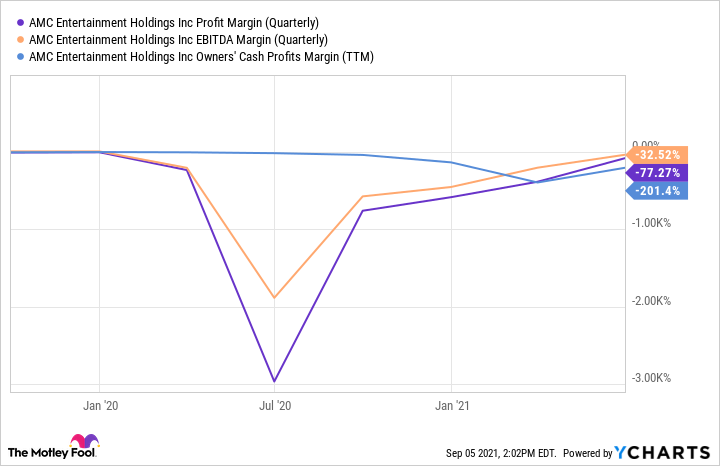 Since AMC generates nearly all of its revenue from people visiting theaters in person, the coronavirus pandemic was a catastrophe. What’s more, AMC still had to come up with the rent payments on its theaters and interest payments to its lenders. Management has since negotiated some delays to those payments, but they are still accumulating.

Unlike a company with a high degree of variable expenses like Uber, which only pays drivers if they are with customers earning revenue, AMC has a high degree of fixed expenses that didn’t decrease with the dropoff in revenue. AMC’s business model works well when revenue is expanding because costs remain relatively flat while revenue rises, but works against the company during times of falling sales.

Indeed, AMC reported an operating loss of $1.5 billion in 2020 and has reported losses on the bottom line in three out of the last four years.

A confluence of factors has fewer people visiting movie theaters to watch films. From 2002 to 2019, tickets sold to view movies at the box office in the U.S. and Canada decreased from 1.58 billion to 1.24 billion. The factors can be combined and stated as the lessening degree of the quality difference between watching films at home and in a theater.

Higher-quality TVs, better sound systems, and the rise of streaming services are all improving the home viewing experience. Meanwhile, the only noticeable upgrade in movie theaters has been replacing cloth chairs for leather power reclining seats — an improvement, to be sure. At the same time the quality difference is narrowing, the price difference is expanding.

Consumers can subscribe to the Disney streaming bundle (Disney+, Hulu, ESPN+) for less than $15 per month and a Netflix subscription for less than $10 per month and entertain a whole family for less than $1 per day. That’s in contrast to watching a film on the big screen at over $10 per ticket, even higher in some cities. Studios are increasingly putting blockbuster films straight onto their streaming services, giving viewers a compelling choice of content to choose from.

This trend is unlikely to reverse, as studios keep a higher share of film revenue if they don’t have to split with movie theaters like AMC.

The current operating environment for AMC is severely constrained, with a deadly virus still in circulation. Over the longer run, the secular popularity of streaming services and the increasing quality of the home viewing experience is bad news for AMC. Looking at the company’s business prospects alone, you should not invest in AMC stock right now.