The goal is to offer the company’s EV customers a large charging network with nearly 60,000 plugs. And with a growing fleet of EVs coming in the next few years, this will be an important addition for General Motors. But it also highlights just how weak a position EV charging stocks are in.

It may seem like good news on the surface: Charging networks are being aggregated by GM under one program. Here is what Blink Charging said in its press release about the new agreement with GM: “As part of GM’s Ultium Charge 360, EV customers will soon be able to easily see real-time charging information, find stations along a route, and initiate and pay for charging across EV charging networks directly through GM vehicle mobile apps.”

Let’s break down the keys to this announcement:

Customers are paying GM, using GM’s app, and using a standard, commoditized plug. In no way does this agreement give us an indication that the charging-network companies have any pricing power or the ability to differentiate themselves. They’re a “dumb” plug to GM EV owners and a charging point on a map.

Differentiation is key in any business. A differentiated business generally leads to higher margins, a competitive moat, and even higher growth rates than the market overall. But in EV charging, we’re seeing commodification happen.

You can see below that Blink Charging’s margins are low (in the mid-teens) and look like they’re trending downward. Meanwhile, shares trade at a whopping 239 times revenue. So the market is pricing in high growth and rapidly improving profitability, but GM is showing that Blink’s chargers are exactly the same as those of the six other companies in the Ultium Charge 360 network. 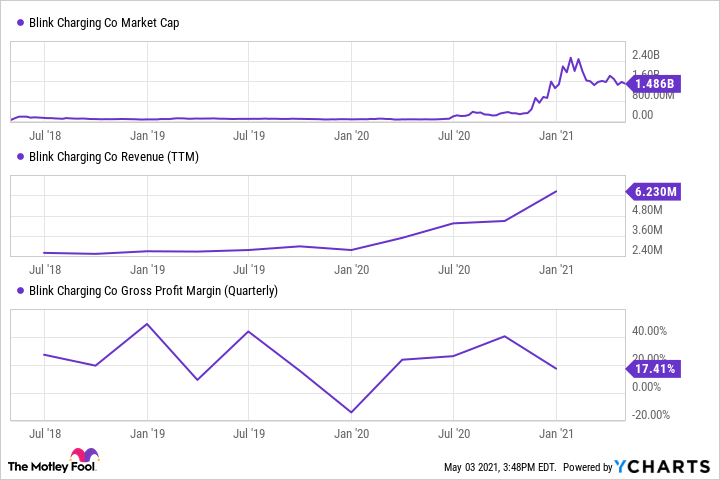 This doesn’t bode well for the investment prospects of these charging stocks. None of these companies appear to be differentiating themselves, and given the prevalence of electricity and the relatively low cost of an EV charger, I don’t see how they’ll make a great long-term business out of charging.

We can also see that GM is taking a different strategy in charging than Tesla (NASDAQ:TSLA). Tesla’s network of around 20,000 Superchargers was built by the company, and it’s building a self-owned network.

GM is leveraging other companies in building out a charging network. But in this agreement, we can see that the company still wants to maintain a digital relationship with customers, pointing them to partner charging plugs. The advantage is that GM will have 60,000 plugs available without spending a dime building the network.

The question for both companies is whether or not chargers themselves are a differentiator. Tesla clearly thinks they are, and puts chargers in visible places as a result. GM thinks electrons from a charger are a commodity, so the plug brand won’t matter at all. I tend to agree with the latter view, but time will tell if Tesla can differentiate its chargers as third-party networks proliferate.

Just think about where the power lies in this Ultium Charge 360 network. As charging networks grow, GM could add more or drop some chargers at a whim, potentially taking thousands of potential customers away from Blink, ChargePoint, EVgo, or others. So, they have very little power in this relationship.

They also aren’t differentiating their own network or building a direct relationship with customers. That power is being handed over to GM.

Add it up, and charging networks are showing that they’re a commodity to EV manufacturers and EV drivers. That’s not a great position to be in as a company. And with stocks trading at astronomical price-to-revenue multiples and very little profit on the horizon, this is an industry I would take a very bearish view of long term, even if they add partners and EVs continue to sell well.