At roughly 2 p.m. EDT on Thursday, shares of U.S exploration and production company Centennial Resource Development (NASDAQ:CDEV) had hit a nadir of around 16% for the week. Following a little behind was energy services name Oceaneering International (NYSE:OII), which was down as much as 12% at its worst point in the week. But “beating” them both on the downside was solar panel maker SunPower (NASDAQ:SPWR). The stock’s low for the week was a decline of just over 17%. There is a lot to take in here.

Starting with oil, the big story in the energy sector this week has been the difficult negotiations at OPEC. The industry group has been talking since last week about increasing output in an attempt to keep supply and demand in check. Members broadly agree that an output increase is needed, given the continued improvement in demand following the 2020 pandemic-driven economic downturn. However, some within the group want to see their specific production levels increased relative to their previous levels and peers. While an agreement looks close to being hammered out, the internal tension isn’t likely to be over.

This is notable for Centennial and Oceaneering. The last time OPEC had a falling out in early 2020, production was ramped up in a wild grab for market share. That, in conjunction with the pandemic, led to a dramatic plunge in oil prices. So the uncertainty surrounding OPEC’s production levels today has investors jittery and oil prices have been volatile. As a driller, Centennial’s top and bottom lines are directly impacted by energy price moves, so weak energy prices of late have pushed the stock lower. Oceaneering could see a second-order impact, with the prospect of lower oil prices leading to fears of weak demand for the company’s services.

Centennial and Oceaneering tend to be volatile names in the energy patch, making them both most appropriate for more aggressive investors. Conservative types should probably stick to larger, more diversified names like Chevron or ExxonMobil. 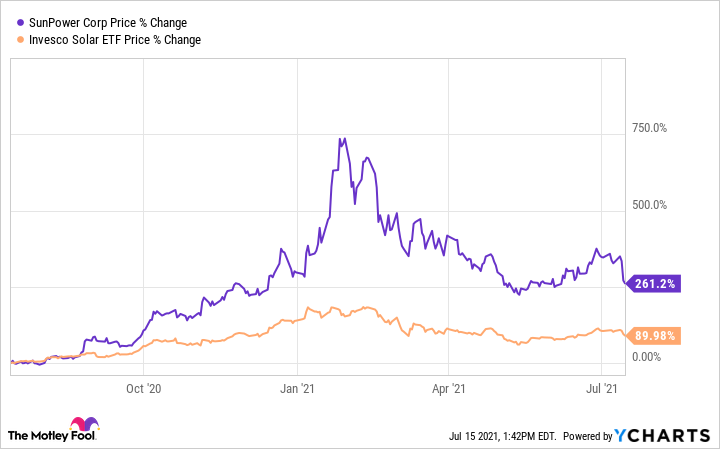 SunPower is a little harder to read. The solar panel and services company saw a massive drop in its share price on July 14. That day’s news, however, was something that seemed positive — the company has been selected by Woodside Homes to supply solar systems to the homebuilder in Northern California. However, the day before, Credit Suisse started coverage of SunPower with an underperform rating and set a $22 target price on the stock. That’s below where the shares are trading, even after the stock price declines so far this week. And, today, Piper Sandler lowered its price target from $28 to $26. Investors don’t like downbeat news from analysts, and the Credit Suisse call was notably negative. SunPower’s stock has had a pretty good run over the past year (it’s up around 260%), so investors taking some profits in the face of analyst concerns isn’t surprising. That’s doubly true given that SunPower’s gain has handily outdistanced the average solar power stock, using Invesco Solar ETF as a proxy (this exchange-traded fund has gained around 90% of the past year).

It’s also worth noting that the broader solar sector has been in a downtrend since mid-January after a strong early-year run-up. So mercurial investors could be looking for reasons to sell, as well. For conservative types, a potential shift here could be to a utility name with large exposure to renewable power, like a NextEra Energy, or TotalEnergies, which has been a major shareholder in SunPower for many years and is using its diversified oil business as a foundation for expansion into clean energy.

Uncertainty is high right now on Wall Street and investors are jittery. Swift and dramatic moves, even outside Reddit-driven stocks, are pretty common. All it takes is a little bad news and investors will drop a stock like yesterday’s garbage. It is not an easy time to be an investor and caution is probably in order. It’s why conservative and even moderate types might want to skip names like Centennial, Oceaneering, and SunPower and, instead, look at larger, more diversified names in the broader energy sector.