Shares of First Solar (NASDAQ:FSLR), Sunrun (NASDAQ:RUN), and SunPower (NASDAQ:SPWR) fell 12.3%, 19%, and 23.2%, respectively, in April, according to data from S&P Global Market Intelligence. At first, the declines in these stocks may seem counterintuitive, given that the Biden administration has unveiled a number of pro-clean-energy policy proposals since taking office.

Yet while each of these companies has solid business prospects, they are also growth stocks trading at very high multiples of earnings, especially after a monster run at the end of last year. As such, all fell hard along with other growth stocks, as inflation fears depressed the multiples investors were willing to pay on these types of companies. And the new capital gains tax proposal from the Biden administration also may have led some to take profits on their big winners from 2020.

The only company to report earnings during April was First Solar, which reported on April 29. First Solar’s revenue came in ahead of expectations, although profitability missed. However, the company only reiterated its existing full-year guidance and lowered the bottom end of its gross profit guidance — probably because of supply constraints and higher shipping costs seen across a lot of the technology sector. 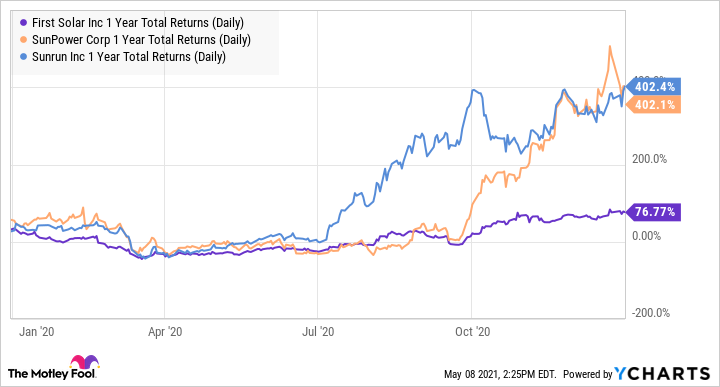 The mere reiteration of guidance may have soured some, as the run-ups in solar stocks toward the end of next year led to high expectations for financial outperformance. It’s likely that a mere restating of prior guidance wasn’t enough to lift sentiment. With fears of inflation and higher interest rates running rampant during April, almost all high-multiple stocks were sold off for more cyclical and value names, unless earnings results really outperformed by a lot.

All three solar companies have interesting growth prospects, given that less than three percent of U.S. homes have solar and storage. Furthermore, it’s clear the Biden administration and/or Democratic Congress may give further incentives for solar deployments for the next four years at least. However, those growth prospects come with relatively capital-intensive and low-margin businesses, which makes things more complicated.

First Solar is focused only on making panels and large systems, which it typically sells for cash. It has the best balance sheet of the three, but it also needs to invest heavily in its manufacturing plants.

Meanwhile, Sunrun, fresh off of its Vivint Solar acquisition last year, is purely dedicated to leasing or lending against residential deployments, using third-party panels and hoping to sell more services to its “subscribers.”

SunPower does both, producing its own panels while also managing its residential and commercial systems.

Both Sunrun and SunPower rely heavily on front-loaded selling and marketing expenses as they pursue the growth of the U.S. residential market and 20-year leases, so up-front investment tends to depress profits and burns cash today. On the other hand, they also could see more upside if the country reaches a tipping point on residential solar deployment and high growth prospects come to fruition.

Yet with solar incentive policies and interest rates constantly in flux, investing in the right solar stock can be tricky. Therefore, investors should focus on the company whose strategy and business model makes sense for them, and in management teams they believe in. While upside is there, prepare for more volatility in this space.