Lithium Americas didn’t release any news last month, nor were there any Wall Street analyst downgrades of the company’s stock.

We can probably attribute the stock’s April decline to profit-taking. After all, despite a significant pullback since mid-January, shares are still up a whopping 348% over the one-year period through May 3.

What’s been driving that powerful gain? The combination of strong long-term demand projections for lithium, which is needed to produce the lithium-ion batteries that power electric vehicles (EVs), and Lithium Americas’ progress in developing its two lithium mining projects.

As I’ve previously written, “In January, the company’s Thacker Pass lithium project in Nevada achieved a key milestone: The U.S. Bureau of Land Management issued a Record of Decision for this project following completion of the National Environmental Policy Act process. It expects to receive all remaining state permits and water-right transfers later this year.”

The company’s second project, Cauchari-Olaroz, is in Argentina. It’s a joint venture with China’s Ganfeng Lithium, in which Lithium Americas has a 49% interest. Production is expected to start in mid-2022. 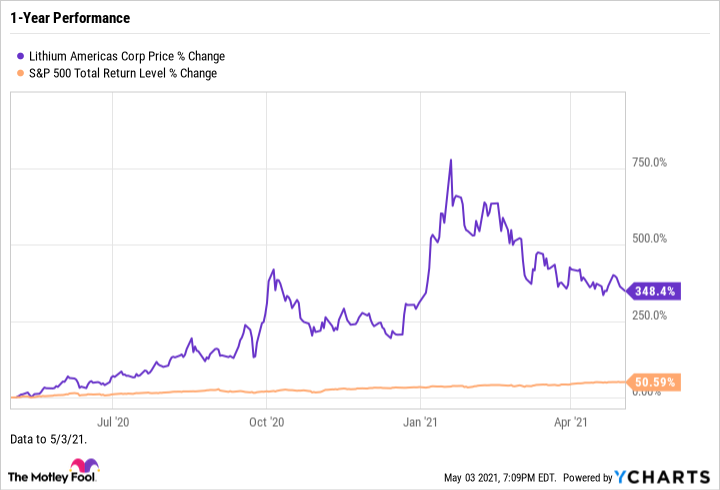 Lithium Americas stock is speculative because the company isn’t yet in the commercialization stage. That said, solid progress on its two lithium projects makes this stock worthy of a place on your watch list.

Investors can probably expect material news soon. While the company hasn’t yet announced a date for the release of its first-quarter 2021 update, it will likely be within the next week or two.