The value of Charles Schwab (NYSE:SCHW) stock jumped 37% in the first half of 2021, according to data provided by S&P Global Market Intelligence. And if we look at the trailing 12 months, the stock has doubled in value, up 103%.

One factor explaining the rise might be excitement about Schwab’s acquisition of TD Ameritrade, which makes Schwab one of the largest stock brokers in the world. But perhaps the main reason why people are buying Schwab stock is interest rates. While the Fed wants to keep rates low, sooner or later rising inflation might force its hand, and rates will start going up again. Schwab stock has done very well, even in this ultra-low rate environment. But if the macro situation changes and rates start to rise Schwab’s stock will be phenomenal.

While most people think of Schwab as a stock brokerage, the company is famous for being cheaper than its rivals. You might think of Schwab as the Robinhood of the 1970s. When the Securities and Exchange Commission (SEC) finally deregulated commissions in 1975, Schwab made out like a bandit. For decades the company led the way in the discount brokerage revolution, taking market share from much larger players.

While Robinhood offered free commissions as far back as 2013, what really shocked the industry is when Schwab went to 0% commissions in 2019. That’s when all the banks and everybody else followed suit. So how does Schwab make its money while it’s trading stocks for free?

It’s similar to the way Alphabet makes money with its free search engine, Google. As founder and chairman Charles Schwab once said, “You offer the primary service on a free basis and hope to attract enough business, enough clients, that you figure out different ways to make some revenue.”

Schwab now has $7 trillion sitting in customer trading accounts. Are you shocked to discover that Schwab has made about 1% off this $7 trillion? That’s how the company has acquired $70 billion of its own cash.

Schwab’s stock is extremely sensitive to interest rates. We’ve had ultra-low rates for over a decade. Even in this harsh environment, Schwab stock has beaten the market. 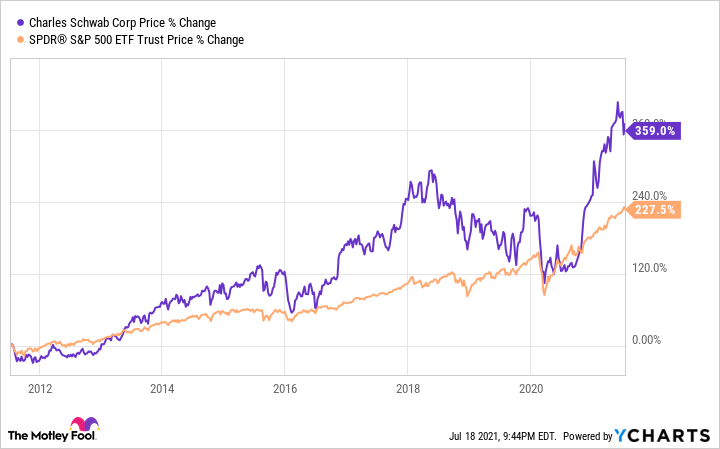 So you can imagine how the stock will perform if and when interest rates start rising again.

Inflation is going up. It’s going up in the housing market, in automobiles, in gas prices, in food prices. Sooner or later the Fed might have to raise interest rates in order to combat this rapid rise in prices.

If that happens, bank stocks will do well. And Schwab will morph from a stock that beats the market to one that obliterates it. This outperformance will reflect the difference between 1% of $70 trillion and 1.25% of $70 trillion, or even 2% of $70 trillion. Even a slight rise in interest rates means billions of dollars for Schwab.

US baseball hangs on to beat South Korea, win Group B with Jack Lopez web gem
42 mins ago

US baseball hangs on to beat South Korea, win Group B with Jack Lopez web gem

It’s not that Tony La Russa is old, it’s that he’s an ass
1 hour ago

It’s not that Tony La Russa is old, it’s that he’s an ass