Shares of Upwork (NASDAQ:UPWK) sank 17.5% over the last week of trading, according to data from S&P Global Market Intelligence. The gig-work marketplace company’s stock got caught up in a broader market pullback that hit growth-dependent tech stocks particularly hard.

There doesn’t appear to have been much in the way of business-specific news behind Upwork’s sell-off last month, but concerns about faster-than-expected inflation spurred sell-offs across the market. The S&P 500 index closed out week down roughly 1%, while the more tech-heavy Nasdaq Composite index ended the period down 1.9%. Concerns about inflation ramped back up this week, and that spelled trouble for Upwork stock. The Consumer Price Index (CPI) report was released on July 13 and showed that consumer prices increased 0.9% from May to June. It also showed that June’s index numbers were up 5.4% year over year, representing the largest CPI jump since August 2008.

Investors are worried that rising inflation could cause the Federal Reserve to raise interest rates, which would likely pull money out of the stock market due to rising bond yields. It would also make it more difficult for companies to fund growth initiatives with attractively priced debt.

Upwork’s share price has seen some volatile swings in 2021, but it’s still up big on the year. 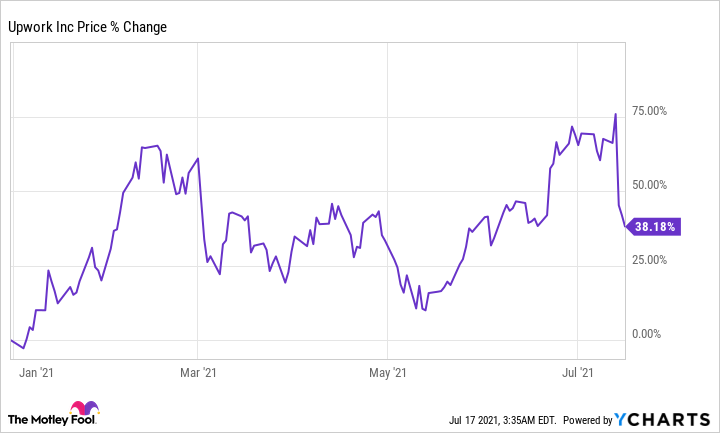 The gig economy has seen big growth over the last decade and will likely see more big growth over the long term. Upwork’s jobs marketplace and other services have been posting strong growth, but investors should proceed with the understanding that the stock remains relatively high risk. The company currently has a market capitalization of roughly $6 billion and is valued at approximately 12 times this year’s expected sales.

In addition to risks posed by inflation, rising interest rates, and other macroeconomic shifts, it’s also possible that Upwork will come up against new regulatory pressures. Some legislators at state and national levels have indicated desires to put tighter restrictions on gig economy labor and push jobs in the category into the traditional employer-employee structure. While such shifts could potentially hurt the value of Upwork’s platform, I still like the stock as a high-risk, high-reward play and own shares in my portfolio.

Philip Rivers hints at potential NFL comeback: ‘I have not completely ruled that out’
31 mins ago

Philip Rivers hints at potential NFL comeback: ‘I have not completely ruled that out’