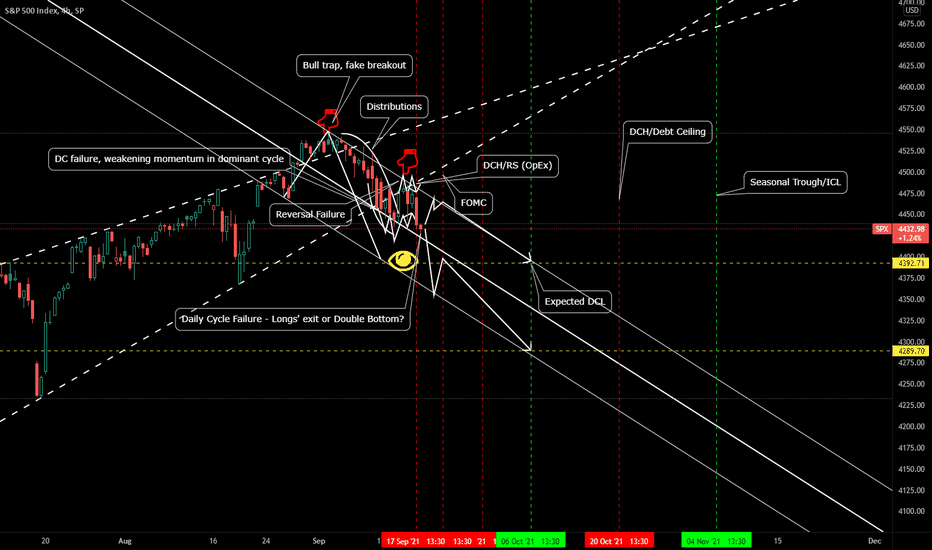 Brief for SPX:
– Weakness in price due to Quad Witching ahead of FOMC. Controversy in taper announcement as ECB has done.
– Technical weakness in price, as it has fallen out of a rising wedge and as of yet, failed to make a quick recovery to ATHs as usual. Price closed in a DCF , indicating weakness in the dominant cycle.
– Fears of real estate market collapse in China, with global implications (there are US counterparties involved). However, it has yet proven to be anything more than an isolated event.

Cyclicality:
– SPX facing headwinds of seasonal decline.
– Expecting DCL in early October, a bit of a rally to a DCH and choppy markets in mid-late October, then a greater selloff into the end of October in the seasonal trough, where an ICL may be made into an end of year rally.

Debt Ceiling:
(Opinion)
– Interestingly, October Treasury Note Futures trading at a slight discount to September, or December. This indicates that there is some risk-off on the notes regarding the debt ceiling, but nobody expects the debt ceiling to not be raised. The US government had shut down for 35 days at the end of 2018 due to debt ceiling disagreements, so I think this is a legitimate concern and could be (a largely perception-based) catalyst for a sizable pullback.
– If we take a look at 2018’s correction, it began with the Sept Quad witching as well. A very similar setup to now, which is of concern:

– 3700 is an area of Demand which would correspond to such a pullback, while 4290-4400 is the mid-year Pivot Range which should be watched closely.

Key Points:
– Seasonality .
– Debt ceiling decision approaching, media is still buzzing about Evergrande but the narrative to form around our trade should be Evergrande > FOMC > Debt ceiling > Then perhaps the US-China Trade Deal for the EOM October ICL .

Chimy Avila’s journey to LaLiga and Osasuna: “My body is my life story”
28 mins ago