Are the New York Yankees for real?

They ultimately extended that winning streak to 13 — their best since 1961 — before it was snapped by the A’s on Saturday. Still, the Yankees have been arguably the AL’s best team in the second half.

Will this high-caliber play continue down the stretch, or will we see more of the inconsistent club we witnessed in the first half? We posed this question to ESPN baseball experts Joon Lee and David Schoenfield, and asked for their thoughts on how far the Yankees ultimately will go this season.

It’s been an up-and-down ride so far in the Bronx. Give us one reason to believe the red-hot, second-half version of the Yankees is the real Yankees — and one reason it’s a mirage.

Lee: Everyone is getting healthy and they’re starting to feel the impact of the entire roster. The most important thing GM Brian Cashman did at the trade deadline was reestablish the Yankees’ depth. As the Los Angeles Angels show with Shohei Ohtani and Mike Trout, you can’t win in baseball with a top-heavy roster. The Yankees came into the season as a team with both depth and star power, but it seemed as if the two could never align for success. At the moment, they are.

On the other hand, it feels like the Red Sox and Yankees had their seasons flip. Boston overachieved in the first half, while the Yankees struggled. Since then, it has been the opposite, and the teams have swapped places in the standings. But something the first-place Tampa Bay Rays haven’t been all season is inconsistent, while New York has shown it has two extremes that could appear on any given day. Despite the Yankees’ second-half success so far, we don’t know which team will show up when October comes around.

Schoenfield: Joey Gallo and Anthony Rizzo not only provided two much-needed left-handed bats to the lineup, but they added some much-needed swagger as well. The Yankees seemed to be drowning in their mediocrity and level of expectations. Through July 29, coinciding with Rizzo’s first game on July 30, they were hitting .235/.323/.394. In 28 games since, the Yankees have gone 23-5 and hit .249/.337/.436.

The pitching has also improved. On July 29, they lost 14-0 to the Rays — in a game Gerrit Cole started. It was arguably the low point of the season. They’ve posted a 2.77 ERA in that 23-5 stretch and opponents have scored 3.18 runs per game. They did much of that without Cole, who missed two weeks while on the COVID IL.

So, hitting and pitching — two reasons this surge is not a mirage. If you want a reason to be skeptical, the bullpen is 12-2 with a 2.09 ERA over the 28-game stretch, all while averaging nearly four innings per game. Can it keep that up over the heavy workload?

Who will be the most important Yankee down the stretch?

Lee: The return of starting pitchers Corey Kluber and Luis Severino could go a long way in shaping up the Yankees for a strong run in the postseason, but third baseman Gio Urshela could be a game-changer, too. Urshela has just come back after missing nearly a month with a hamstring injury, and he has been such an important player for the Bronx Bombers over the past two seasons. Urshela hasn’t been quite as good in 2021, striking out at a higher clip than in 2019 and 2020, but if he’s able to hit more like the Urshela of old, the Yankees’ lineup will look even more formidable down the stretch.

Schoenfield: I just mentioned the bullpen, but Aroldis Chapman is still a concern in the ninth. Aaron Boone had to pull him out of two recent save chances, with Lucas Luetge and Wandy Peralta having to come on for the final out. If Chapman can’t be trusted, then Boone will have to save Chad Green or Jonathan Loaisiga for the ninth inning, which affects everything else leading into the ninth. The best Yankees team features Chapman locking down the ninth, and they’ve been good despite a shaky Chapman, but that’s not a recipe for success in October.

How far will the Yankees go this season? 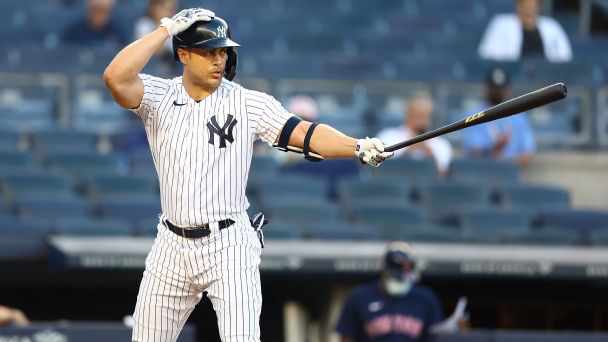 Catch the 2021 MLB season on ESPN and the ESPN App.

Schoenfield: The lineup has been better, but does it compare with Houston’s or Tampa Bay’s or Chicago’s? I’m not yet convinced. Rizzo and Gallo do provide left-handed balance, but I still feel this is a lineup you can match up against in a postseason series — bring in a lefty to face the Rizzo/Aaron Judge/Gallo part of the lineup and then a right-hander to mow down the bottom of the order. Still, they have a legit ace in Cole and the White Sox have looked more vulnerable of late. To me, Houston is the team to beat — and the Yankees might meet the Astros in the division series.

If the Yankees miss the playoffs, or exit early, what would it mean for manager Aaron Boone? And how might it affect the team’s offseason plan?

Lee: I think part of this would be dependent on exactly how the Yankees exit. Boone certainly needs to take some of the blame for how this team performed early, but he also deserves credit for helping turn things around. Beyond Boone, I’m curious to see how the Yankees approach Gleyber Torres‘ future, given his struggles this season — especially with a marquee shortstop like Trevor Story available as a free agent.

Schoenfield: Boone is in the final year of his contract and there has been little public discussion of an extension, so it does feel like the Yankees have to at least make the postseason for him to keep his job, especially in a season in which they were the AL favorites for the World Series — where the Yankees haven’t been since 2009. I don’t think a wild card is enough, however, after disappointing losses in the ALDS to the Red Sox in 2018, to the Astros in the 2019 ALCS, and to the Rays in the 2020 ALDS. Boone might have to win the AL to be back in pinstripes in 2022.

As for the offseason, we’ll have to see how the new CBA plays out and how willing the Yankees will be to blow past the luxury tax (if there is one) after staying under it this year. I’m with Joon: They’ll have a new shortstop next season, with the issue whether Torres slides over to second base or is traded for some prospects/pitching help. They need to become a little more athletic (Gallo helps in that regard) and a good two-way player like Story is a good fit, with his power, defense and baserunning. Aaron Hicks is still under contract, but a new center fielder might be in order as well.

Vogel: Not feeling ‘under siege’ amid job chatter
21 mins ago