Nikolaj Ehlers is a great example of the “breakout player” life cycle in the NHL.

The Winnipeg Jets forward was heralded as a prospect, as the ninth overall pick in 2014. He made a leap in quality from his rookie season in 2015-16 to his second campaign in 2016-17, and then stayed around that level for the next few seasons. The analytics community excitedly backed his game, positioning Ehlers in the coveted “most underrated player” conversation.

In 2020-21, the breakout came as the production finally caught up with the potential: 46 points in 47 games, a stellar 3.5 points per 60 minutes of play. When he left the lineup due to injury, his absence only underscored his importance to the Jets.

It happens every season, whether it’s a player who was flying under the radar getting his due or a player who finds his game just as he finds the right situation to enhance it — such as increased ice time or better linemates.

Here are 10 players who are primed to have breakout seasons in 2021-22. Some are names you already know. All have a chance to be household names soon.

Boqvist, 21, was the only current NHL player sent to the Blue Jackets in the Seth Jones trade. He could slide right into Jones’ old spot on the roster, on the right side of Zach Werenski.

We haven’t seen Boqvist come close to his potential as an offensive force at 5-on-5, with 19 points in 76 games in his first two NHL seasons. He did have an uptick in his power-play output — an expected result, as he averaged 1 minute and 13 seconds more on the man advantage than he did as a rookie. His 3:23 per game was 15th in the NHL last season. He might not get that with Columbus, but he’ll get his chance to be a quarterback.

Two things have us excited about Boqvist this season. Theoretically, the Blue Jackets’ 5-on-5 play could paper over some of his defensive deficiencies. So would playing with Werenski, which is the other thing that has us excited: potentially pairing with a motivated defenseman who is ready to grab the spotlight now that he has stepped out of Jones’ shadow.

“I’m ready to be a true No. 1 and show everyone I can do it without him,” Werenski said recently. Elevating Boqvist to a career year would be a résumé builder.

The Blues can thank a couple of unforeseen occurrences for getting Buchnevich on their roster.

The first is the NHL’s pandemic economy. The flat cap meant the Rangers didn’t want to have to pay him what arbitration would have awarded him, as that award would have been based on pre-pandemic player comps. So they traded Buchnevich, a player whose skills they always oddly undervalued, to the Blues, who were going through an unexpected situation: Star winger Vladimir Tarasenko had requested a trade. Upward of $7.5 million against the cap each season would leave with him, and Buchnevich’s $5.8 million AAV over a new four-year term would slot right in.

That’s how the Blues ended up with a top-line winger who drives play, has seen his 5-on-5 scoring steadily improve and who can play the kind of defense that St. Louis loves to see from its top players. His 2.8 points per 60 minutes last season is a harbinger of things to come for the talented 26-year-old, depending on the line he clicks with in St. Louis. It’s a weird flex for a player to gain more renown after he leaves New York City, but here we are.

As the Sabres enter the P.E. (Post-Eichel) era, their depth chart will be readjusted at the center spot. Depending on who comes back the other way for Eichel, it could be Casey Mittelstadt or Cozens getting the bump up to top-line duty. Cozens, 20, has 41 games under his belt after a middling rookie season (13 points in 41 games). The majority of his growing pains were on the defensive end (2.67 expected goals against per 60 minutes), which is to be expected for an NHL freshman.

He’s going to improve in Year 2, with more ice time and an expanded role on a rebuilding team. Does that mean top-line minutes with someone like Victor Olofsson, one of the few established offensive playmakers on the team? We think he eventually earns the chance this season.

If Vince Dunn is ever going to pop, it’s going to be now. Dunn, 24, was plucked from the St. Louis Blues by the Kraken in the expansion draft. It wasn’t much of a surprise: Despite an off year in 2020-21, Dunn had been the kind of analytics darling that the Kraken’s front office would seemingly covet. His pedigree has been as a puck-moving defenseman, but his scoring chance suppression on the Blues’ blue line was exemplary.

For years, opposing fans had hoped their team could rescue Dunn from his burial on the Blues’ depth chart. He gets his turn in the spotlight for the Kraken, slotted as a second-pairing defenseman behind what we assume will be Mark Giordano and Adam Larsson on the top pairing. That could mean a partnership with Jamie Oleksiak, which could mean a chance for Dunn to shine offensively and surpass the 35-point career best he posted way back in 2018-19.

Farabee, 21, was one of the few young players who progressed instead of regressed last season. He went from 21 points in 52 games as a rookie to 38 points in 55 games last season, seeing his average ice time jump by almost two minutes (16:01). His biggest leap forward was in scoring goals, as he netted 20 of them last season. That led the Flyers, and tied for 15th in the NHL among forwards.

He spent last season skating with James van Riemsdyk and Sean Couturier. The chance for him to take another leap likely rests on whatever forward configuration coach Alain Vigneault decides on after the offseason acquisition of Cam Atkinson. Farabee can play either wing, for what it’s worth.

Isn’t it pleasant to discuss a San Jose player under the age of 27 and a Sharks defenseman who isn’t signed through the end of time, with trade protection? 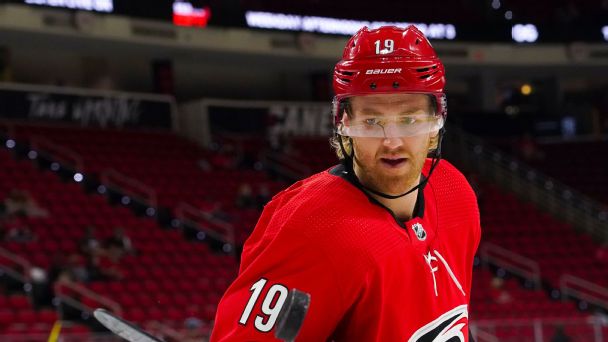 Ferraro, who turns 23 in September, was a second-round pick (49th overall) in 2017. He played 117 games over his first two NHL seasons, amassing 28 points. His game took a leap in quality in his second season at both ends of the ice, but especially on the defensive end, where he was slightly below replacement level as a rookie.

Ferraro settled into a partnership with Brent Burns that saw them click, with a positive expected goals percentage. This will be a huge season for Ferraro, with restricted free agency looming next summer. He might not have the sizzle of some of the other players in his age bracket here — or among NHL defensemen — but he’s tracking in the right direction.

In 2019, J.T. Miller was acquired by the Canucks from the Lightning. The price was high — a conditional first-round pick went the other way in what was a cap casualty deal for Tampa Bay — but the intent was clear: GM Jim Benning felt that Miller’s north/south skating, forechecking and finishing ability would fit well in Vancouver’s top six. The result was a 27-goal season in which he had 72 points in 69 games.

Garland, 25, has the chance to experience the same statistical turbo boost after coming over in the Oliver Ekman-Larsson trade — and given the Canucks assumed the latter’s albatross of a contract, that should tell you how high they are on Garland. His best offensive season was in 2019-20, when he potted 22 goals in 68 games. He has had 39 points in each of the past two seasons. No disrespect to Nick Schmaltz, but he’s now going to have either Elias Pettersson or Bo Horvat setting him up at 5-on-5, and will join a power play that’s only one year removed from being fourth in the league (24.2%). If this trade turns out to be disastrous down the line for Benning, it likely won’t be because Garland didn’t live up to his new five-year, $24.75 million deal.

There can be a delayed reaction to breakout players. Necas had a whale of a season for Carolina in 2020-21, with 41 points in 53 games that included a four-point night against the Stanley Cup champs from Tampa Bay in March. Maybe the divisional realignment walled him off from the rest of the hockey world, because his ascent wasn’t widely recognized.

That changes this season. The 22-year-old forward has developed into one of the NHL’s best at entering the zone cleanly and then creating offense off that rush. He has improved defensively, too. He played with a confidence that wasn’t there in his rookie campaign in 2019-20, meshing with Nino Niederreiter as well as both Vincent Trocheck and Sebastian Aho. His third season, ahead of a new contract, could be a star-making one.

The offseason had so many blockbuster transactions that many overlooked the Bruins passing the torch to Ullmark, on a four-year deal with trade protection. While the door isn’t closed on Tuukka Rask coming back in some capacity after hip surgery, this kind of commitment tells you they believe the 28-year-old can take the crease.

There’s evidence to that end. Ullmark has put together two straight strong seasons on terrible Sabres teams, including a 9-6-3 record and a .917 save percentage last season for a team that had a .330 points percentage in the standings. He saved over 10 goals above average for the second-worst defensive team in the NHL (3.50 GAA). Ullmark is now playing for a team that was fourth in GAA (2.39) and, more importantly, second on the penalty kill (86.0%) after having Buffalo’s 26th-ranked penalty kill drag down his stats.

This feels like an NFL team taking a solid quarterback from a mediocre team, sticking him in a time-tested system and watching him turn into an All-Pro.

Vrana, 25, has crested over 20 goals twice and ended up with 19 in 50 games last season with the Washington Capitals and Red Wings. He had 11 points in 11 games after being traded to Detroit in a deal that saw Anthony Mantha sent to Washington. That was enough of an audition to earn him a three-year, $15.75 million extension as a restricted free agent.

The Red Wings are going to let Vrana cook. His time on ice jumped by nearly three minutes (17:16) when he arrived in Detroit. Best of all, he averaged 10 shots per game at 5-on-5 in that short sample, which is hopefully a harbinger of things to come: Vrana was at his best offensively in Washington when he was spraying shots on goal like a backyard sprinkler at even strength.

On a rebuilding team desperately seeking a goal-scoring boost — Detroit’s 2.23 goals per game was second fewest in the NHL last season — Vrana is going to get a chance to shine. “My role has changed a little bit. I’m looking forward to prove what I can do and show my potential,” he told reporters recently.

As all 10 of these players are.

LeBron: In ‘one of the best zones offensively’
39 mins ago