With only a few days to go before the start of the 2021 NFL season, we’re taking an early look at how the new 17-game schedule will play out, projecting stats leaders and making predictions.

Which quarterback will lead the league in touchdown passes? What about interceptions? Which rookie wide receiver will have the most yards? What about the defender who will rank first in sacks?

We asked ESPN NFL front office insider Mike Tannenbaum to answer 28 questions, making his picks for stats leaders, the biggest surprises and disappointments and more. He’ll also give his Super Bowl LVI pick. Check out the answers below, which also include Mike Clay’s projections (as of Sept. 3) for each stat category:

Which QB will have the most passing yards?

Tannenbaum’s take: Russell Wilson, Seahawks. With new offensive coordinator Shane Waldron — who previously worked under Sean McVay in Los Angeles and Washington — and a true No. 1 wide receiver in DK Metcalf, Wilson is primed to have the best season of what has already been a Hall of Fame career.

Which QB will throw the most touchdown passes?

Tannenbaum’s take: Patrick Mahomes, Chiefs. With a rebuilt offense line — and Travis Kelce and Tyreek Hill still around — Mahomes could put up another MVP season. He had 50 touchdown passes in his tremendous 2018 MVP run.

Which QB will throw the most interceptions?

Tannenbaum’s take: Ryan Fitzpatrick, Washington. Since 2015, Fitzpatrick has thrown 68 interceptions in 68 games, with the Jets, Bucs and Dolphins. As a full-time starter, he will keep both Washington and its opponents in the game.

Which QB will lead the league in Total QBR?

Tannenbaum’s take: Ryan Tannehill, Titans. With star receiver Julio Jones added to an offense that already includes A.J. Brown and Derrick Henry, this offense will be extraordinarily hard to defend. What do defenses take away? Tannehill has been one of the most efficient quarterbacks in the league the past two seasons, and he could star again.

Which QB on a new team will have the best season, factoring in overall production?

Which rookie QB will have the best season, factoring in overall production?

Who will be the NFL’s leading rusher?

Tannenbaum’s take: Derrick Henry, Titans. He has done it in 2019 (1,540) and 2020 (2,027), so let’s make this back-to-back-to-back titles. Henry is going to get a heavy workload, and he plays for a defensive-minded coach, which is the perfect dynamic for outstanding production.

Who will lead the league in rushing touchdowns?

Tannenbaum’s take: Derrick Henry, Titans. I have to stick with Henry here. He won’t get much work in the passing game — only 37 catches the past two seasons — but his 682 carries since the start of the 2019 season are 119 more than No. 2 on the list (Dalvin Cook). He’s going to get a lot of opportunities to score.

Who will be the leading rookie rusher?

Tannenbaum’s take: Najee Harris, Steelers. The No. 24 overall pick’s ability allows Pittsburgh to mask the deficiency in its offensive line. I don’t see another rookie who will get his volume of work each week.

Jeremy Fowler says the buzz around Steelers rookie Najee Harris is that he could be the best running back in the Mike Tomlin era.

Which RB will have the most catches?

Tannenbaum’s take: Christian McCaffrey, Panthers. Jacksonville rookie Travis Etienne would have been in this conversation if he hadn’t injured his left foot, but McCaffrey — if healthy — has to be the answer. He had more than 100 catches in 2018 and 2019. Look for a lot of long handoffs from Sam Darnold.

Which player will have the most total touchdowns?

Tannenbaum’s take: Lamar Jackson, QB, Ravens. Jackson had 43 in his 2019 MVP season, with 36 through the air and seven more on the ground. With top back J.K. Dobbins out for the year, look for Jackson to pick up even more of the slack in the running game near the goal line.

Which WR will have the most catches?

Tannenbaum’s take: DeAndre Hopkins, Cardinals. Hopkins ranked No. 2 in catches (115) and yards (1,407) last season, his first in Arizona. He could take another leap in Kliff Kingsbury’s offense with Kyler Murray throwing him the ball.

Which WR will have the most receiving yards?

Tannenbaum’s take: Davante Adams, Packers. Adams ranked third here last season, putting up 1,374 yards, behind only Hopkins (1,407) and Stefon Diggs (1,535). With Aaron Rodgers back, Adams will have another stellar season.

Which WR will have the most receiving touchdowns?

Tannenbaum’s take: Mike Evans, Buccaneers. Evans had 13 TDs on 109 targets last season even while dealing with hamstring and knee issues, and he’s elite in the red zone. Another season of Tom Brady throwing him passes could see him on top here.

More people play on ESPN than anywhere else. Join or create a league in the No. 1 Fantasy Football game! Sign up for free >>

Which rookie WR will have the most catches?

Tannenbaum’s take: DeVonta Smith, Eagles. The No. 10 overall pick will be the centerpiece of new coach Nick Sirianni’s passing game. He’ll be Jalen Hurts‘ top target in Week 1 and beyond.

Which rookie non-first-round-pick WR will be the most productive, factoring in yards, catches and touchdowns?

Tannenbaum’s take: Elijah Moore, Jets. I’m a big fan of the second-round pick, who should develop an instant and long-lasting dynamic with fellow rookie Zach Wilson.

Which TE will be the most productive, factoring in yards, catches and touchdowns?

Tannenbaum’s take: Travis Kelce, Chiefs. There’s a reason Kelce is a consensus top-10 fantasy pick. After putting up 105 catches for 1,416 yards and 11 touchdowns last season, Kelce is in for another tremendous year.

Which defender will lead the league in sacks?

Tannenbaum’s take: Joey Bosa, DE, Chargers. If this team stays healthy for all 17 games, it should have a lot of leads, which will lead to sack opportunities for Bosa. He had 7.5 in 12 games last season. 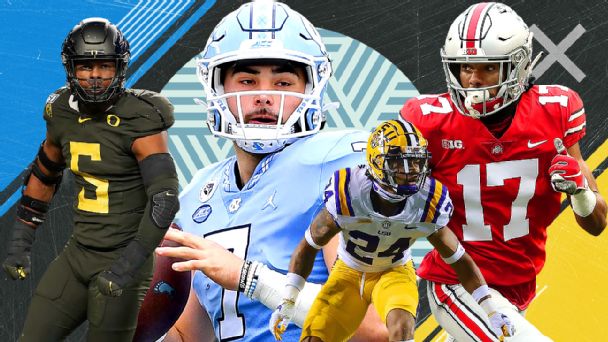 Which defender will lead the league in total tackles?

Tannenbaum’s take: Bobby Wagner, Seahawks. Wagner finished seventh here last season (138), but he has incredible range and is a true three-down linebacker. He’s one of the most underappreciated defenders in the league.

Which defender will lead the league in interceptions?

Tannenbaum’s take: Jalen Ramsey, CB, Rams. Ramsey is the best corner in the league, even if he doesn’t match the 10 interceptions Xavien Howard had last season. I think he’ll pick off a lot of passes in 2021.

Which rookie defender will make the biggest impact?

Tannenbaum’s take: Kwity Paye, DE, Colts. Paye is already entrenched as a starter and could put up double-digit sacks. He has bend off the edge that most elite pass-rushers have.

Which new head coach will win the most games in Year 1?

Brandon Staley, Chargers. If Justin Herbert continues to progress from his rookie year, the Chargers are a sneaky playoff team. More on that below.

Which team will be the biggest (positive) surprise this season?

Chargers. I predicted them to go 12-5. With an improved offense and a coach who will fix the defense, the Chargers have a great foundation and could surprise teams in the AFC.

Which team will be the biggest disappointment this season, and what will its record be?

Steelers. I predicted the opposite record here: 5-12. Pittsburgh has three new starters along the offensive line and a declining, 39-year-old quarterback in Ben Roethlisberger. This is going to be the first losing season of Mike Tomlin’s head-coaching career.

Next offseason, when we look back upon the 2021 season, which free-agent signing will be considered the biggest steal?

Jameis Winston, QB, Saints. I think he’ll have a resurgent year in New Orleans, cutting down on his interceptions and showing that he is once again a bonafide NFL starter. And then New Orleans will have to pay him in 2022.

Next offseason, when we look back upon the 2021 season, which free-agent signing will be considered the biggest bust?

Cam Robinson, OT, Jaguars. Robinson was a franchise tag, but he’s a marginal starter at best. Jacksonville needs to revamp its offensive line to give Trevor Lawrence a chance to be a star.

Texans. I don’t think this will be close. Houston’s roster is the worst in the league.

Who’s your pick to be the Super Bowl LVI champion?

Buccaneers. It’s hard to bet against Tom Brady and a team bringing back every single starter from 2020.

Verstappen-Hamilton has potential to be explosive at U.S. GP
45 mins ago